By Zhou Qijun and Yang Ge 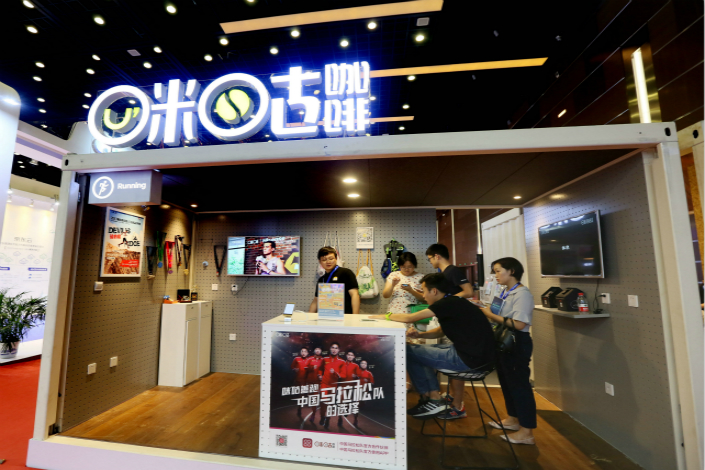 Online literature platform Migu, a unit of leading wireless carrier China Mobile Ltd., is accusing China Reading in court of breaching agreements between the two sides by failing to provide Migu with literary products. Above, Migu hosts an exhibition booth at the 2017 China Internet Conference in March in Beijing. Photo: Visual China

One of China’s largest online literature platforms has sued its largest provider, accusing it of cutting off supplies in a market where reading on smartphones and tablet PCs has become big business.

The lawsuit by Migu, a unit of leading wireless carrier China Mobile Ltd., also comes as China Reading, the online literature arm of internet giant Tencent Holdings Ltd., gets set to make an initial public offering (IPO) in Hong Kong that could raise up to $800 million.

According to the suit filed in the city of Hangzhou, Migu accuses China Reading of breaching agreements between the two sides by failing to provide it with literary products, many of which are serialized and include new installments each month.

Migu believes the bone of contention may lie in its recently introduced plan that allows subscribers unlimited access to products on its platform for 9.9 yuan ($1.48) per month — a deal that took effect in July. China Reading relies on intellectual property fees for its products as its primary source of income, and may have balked at making so many of its products available for such a low cost.

A source at Migu told Caixin that China Reading didn’t want to participate in the 9.9-yuan promotion when informed of the activity. It wasn’t immediately clear whether China Reading had a contractual obligation to continue supplying material under the terms of its current contract with Migu.

A China Reading spokesperson told Caixin the two sides needed to work together to solve the impasse in a way that wouldn’t harm the interests of its authors and allowed for the industry’s healthy development.

The lawsuit, which has been accepted by the court in Hangzhou, calls on China Reading to resume supplying its material to Migu as agreed under their original contracts, and to compensate the platform with 605 million yuan in damages.

Online literature has become hugely popular in China with the explosion of wireless services and smartphones that allow users to browse through novels and various short literature during their commutes and other brief downtimes. The country is now home to about 1.3 billion mobile subscribers, about two-thirds of whom get service from China Mobile. It is also the world’s biggest smartphone market with more than 100 million units sold each quarter, accounting for about a third of global sales.

China Literature is the nation’s largest supplier of such literature, and is preparing a Hong Kong IPO that would raise $600 million to $800 million, according to reports last month. The company said in one IPO filing its revenue rose 59.1% last year to 2.6 billion yuan ($382 million). It posted a net profit of 30.4 million yuan for the year compared with a net loss of 354 million yuan in 2015.