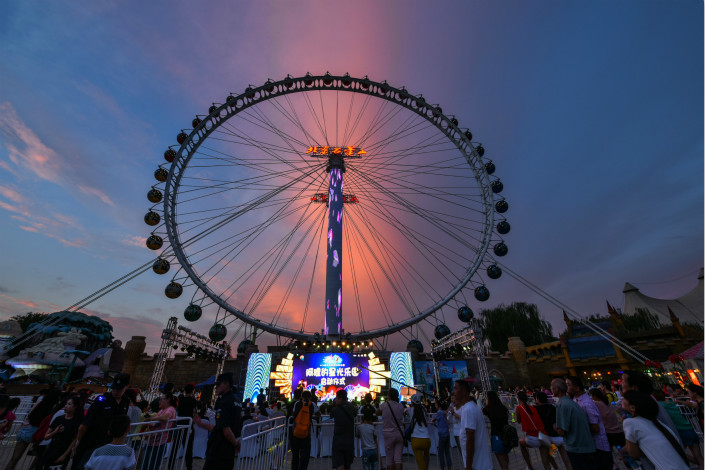 China UniCreative Group, which has a registered capital of 100 million yuan ($15.1 million), didn’t specify how it will raise the hundreds of billions of yuan to fund its ambitious plan to build theme parks featuring well-known intellectual property. Photo: Visual China

Boats in an ordinary theme park are just boats, but in the Shanghai Disney Resort they are the menacing pirate vessels from the multi-billion-dollar “Pirates of the Caribbean” film franchise.

Many of China’s homegrown theme parks lack these pop culture credentials, meaning they struggle to compete with foreign rivals fond of film tie-ins. But a three-month-old Chinese company has announced an ambitious plan to change the script.

China UniCreative Group, officially formed in July, said Tuesday that it plans to link up with “a Hollywood team” and invest hundreds of billions of yuan in several “theme towns” featuring “world-class” intellectual property (IP) in the coming years.

UniCreative said the ambitious projects are likely to be located in Beijing, eastern China’s wealthy Yangtze River Delta, Guangdong province, Hainan province and the Chengdu-Chongqing Economic Zone in southwestern China. The first one is expected to open by 2020.

UniCreative, with a registered capital of 100 million yuan, didn’t specify how it will raise the hundreds of billions of yuan, nor did it identify the Hollywood team.

A UniCreative representative told Caixin that now is not the time to disclose the identity of its investors or IP, but revealed the IP it is targeting includes Hollywood movies as well as famous cartoons and games from North America and Europe.

As the most populous nation, China is expected to surpass the U.S. as the world’s largest theme-park market by 2020, attracting 221 million people a year, according to U.S. consulting firm AECOM.

The theme park industry will likely experience strong growth in the coming years, especially since the country’s family planning rules were relaxed to allow all couples to have a second child, UniCreative said.

However, local theme park developers lack the IP needed to add character to their rollercoasters and Ferris wheels.

There were 109 theme parks in China at the end of 2016, fewer than 20 of which used IP to provide a narrative for their rides, UniCreative said.

Theme park-builders from overseas usually package their attractions with well-known brands that their customers are familiar with, which makes them competitive, said Timothy Chen, a regional director with commercial real estate group Colliers International.

Since The Walt Disney Company launched its Shanghai resort a year ago, several other companies with strong IP portfolios, such as Universal Studios Inc. and toy maker Lego Group, have begun building theme parks in China.

UniCreative said it would not only bring foreign IP to China, but also “renovate” popular figures from traditional Chinese tales, such as the Monkey King, and introduce them overseas.

This story has been updated to reflect responses sent to Caixin by UniCreative.