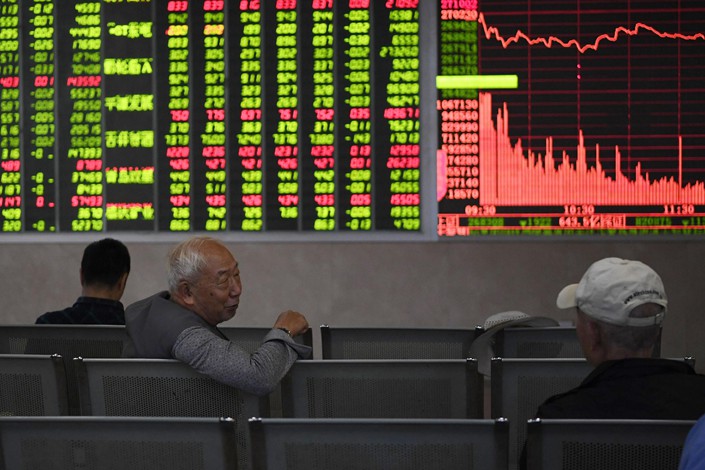 Analysts don’t see any sign of a turnabout in the Chinese mainland stock markets anytime soon, despite signs of bottom-fishing. Photo: VCG

After watching Hong Kong stocks following their mainland counterparts’ fall into bear market territory this week amid some of the weakest turnover in years, investors might be forgiven for wondering if the markets are about to bottom out. But analysts see no sign that stocks are anywhere near a turnabout.

Despite a brief Thursday rally on the news of revival of trade talks with the U.S., the benchmark Shanghai Composite Index slipped again on Friday, falling 0.18% to 2,681.64, trading close to levels seen after its meltdown in mid-2015, when it lost $5 trillion in market capitalization.

Sluggish trading activity, stemming from tight liquidity in the market under a national deleveraging campaign, also doesn’t show signs of picking up.

Trading of Chinese stocks in Shanghai dipped to a new two-year low on Wednesday, with only 93.4 billion yuan ($13.6 billion) of shares changing hands on the bourse, the lowest level since Jan. 7, 2016, according to financial data provider Wind Info. The bourse recorded a turnover of 79.9 billion yuan on the 2016 day under a circuit-breaker system that was later abolished.

A continued decline of trading activity usually is an indicator that investors are fleeing the market. Analysts and traders said it shows a rising awareness of risk aversion on mainland stocks, and it’s hard to see an end to such cautiousness in the near term.

“At present, there is high-risk compensation in the CSI 800 Index, second only to risk compensation’s historic high in 2014, and was reached after the market cut down earnings expectations,” said William Shi, a fund manager of HSBC Jintrust Fund Management Co. The joint venture fund manager runs 18 funds on the mainland with a portfolio of 24.3 billion yuan as of the end of June.

“The market risk was largely released in recent bottoming fluctuations, but it is hard to say how long it will last,” Shi said. “We believe we should increase stock allocation, but the market’s confidence recovery will take time, and its process is unpredictable.”

The Shanghai gauge entered bear market territory in late June amid an uptick in credit defaults, currency depreciation and a broader economic slowdown. The pessimism recently migrated to offshore markets, with Hong Kong stocks entering a bear market on Tuesday, dragged down by some heavily weighted Chinese tech shares such as Tencent Holdings Ltd.

It is generally agreed that a bear market begins when the benchmark stock index is down more than 20% off its recent high, with a losing trend that has lasted for at least two months.

Intensifying the downward trend in the near future is the ongoing trade friction with the U.S., analysts said. Headlines from the China-U.S. trade talks have critically dragged down the sentiment of China shares since U.S. President Donald Trump announced the first batch of tariffs on Chinese goods in mid-March, and the news has continued to influence the market reaction on A-shares (see chart).

“The biggest uncertainty for the mainland market remains the development of the China-U.S. trade frictions,” said Gao Ting, head of China strategy at UBS Securities, at a media conference in Shanghai on Aug. 21. “Once the situation deteriorated drastically, the room for a rebound would be gone. The performance won’t be improved anyhow if there’s no meaningful development in negotiations since a deadlock has already been priced in by investors.”

Foreign money instead is becoming more bullish on Chinese stocks, partially thanks to index provider MSCI’s recent increase in the weighting of stocks listed on the Chinese mainland, and partly on visible opportunities to bottom-fish.

Some $31 billion of foreign investment has flowed into bourses in Shanghai and Shenzhen, China’s two main markets through the Stock Connects linking the mainland and Hong Kong this year. The figure surpassed the total foreign inflows throughout 2017.

Although the sum of investment is still just a fraction of the $74 billion market, it shows a current rare dynamic of participation on the mainland stock markets, which are usually dominated by individual investors and domestic institutions that tends to ride on speculations.

The Qualified Foreign Institutional Investors program, one of the other main channels for foreign investors to boost its holding on mainland stocks, also showed net flows in recent months.

Marcella Chow, global market strategist with J.P. Morgan Asset Management, said that the mainland market’s “weakness may well continue in the short term” and it “remains volatile in response to unfavorable events,” but he sees a solid and stable foundation for the country’s outlook, adding that the moderate price-to-equity ratios of A-shares represent a margin of safety to long-term value investors.