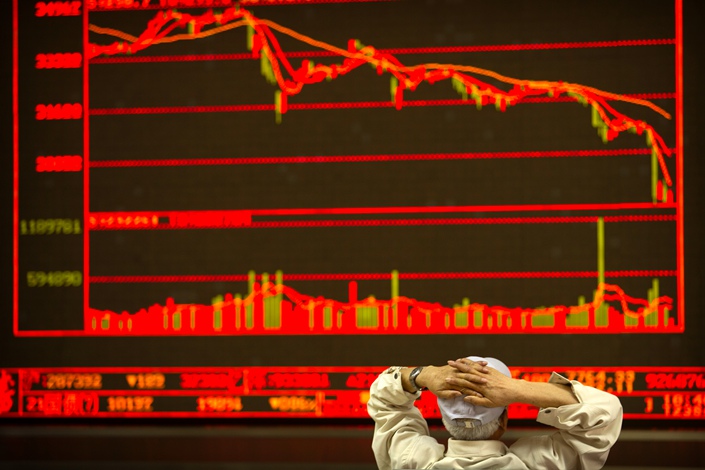 An analyst said that "investors may not be that bearish on the Chinese equity outlook, but they prefer to not to step up until visibility improves over multiple issues.” Photo: IC

The Chinese mainland’s benchmark equity index on Tuesday spent its first day in a while in bear-market territory as a global stock sell-off amid escalating trade tensions added to domestic liquidity pressures that have made the market one of the world’s worst performers this year.

The index shed 0.52% to close at 2,844.51 on Tuesday. As of Monday, the Shanghai Composite Index was 20.3% off its January high. It is generally agreed that a bear market begins when the benchmark stock index is down more than 20% off a recent high, with a losing trend that has lasted for at least two months.

The Shanghai index is now trading near its lowest level since September 2016. The gauge has fallen 14% this year, making it one of the worst performers among major global stock indexes in 2018, trailing Turkey and the Philippines.

Chinese mainland shares were largely dented by China-U.S. trade tensions that have grown far more serious than many expected, along with rising corporate bond defaults, weaker-than-expected economic growth and the swift weakening of the yuan against U.S. dollar, analysts said.

Investor sentiment will likely remain cautious despite regulators’ recent efforts to impose calm. This is because investors have grown more wary of an ongoing national deleveraging campaign that continues to put pressure on the market’s liquidity.

On Tuesday, real estate and aircraft stocks led the decline, thanks to concerns that a slumping yuan will increase the cost of their dollar-denominated debt. The yuan fell to a nearly six-month low against the U.S. dollar on Tuesday.

“Worries over corporate bond defaults are arguably the most dominant factor at this point,” said Tai Hui, chief market strategist of Asia Pacific with J.P. Morgan Asset Management, on Tuesday. “The prospects of higher U.S. dollar interest rates and subsequent dollar strength are raising concerns that companies who have been heavy U.S. dollar debt issuers could face challenges to service their debt, repay or refinance.”

“This also partly explains why the reserve requirement reduction over the weekend has failed to soothe the market. If this is a hard currency concern, providing more renminbi probably won’t provide much immediate relief,” Hui added.

Regulators have sent signals to ease rising concerns of market turbulence, although much of it was disregarded by the market amid lingering uncertainty.

The People’s Bank of China said Sunday it will cut the amount of cash for some lenders to set aside as reserves by 50 basis points from July 5, injecting 700 billion yuan ($107.1 billion) of liquidity into the financial system. The Shanghai and Shenzhen stock exchanges, the country’s two largest marketplaces, also issued statements late Monday to reassure investors that the risks from the sale of shares pledged as collateral are “controllable.”

Still, stocks continued to fall this week. “If we don’t have multiple issues disrupting the market’s gentle sensibilities all at once, the announced RRR cut would have more immediate and lasting uplift to the onshore and offshore Chinese equities,” said Wendy Liu, head of China equity research and chief greater China strategist at Nomura. “Even now, investors may not be that bearish on the Chinese equity outlook, but they prefer to not to step up until visibility improves over multiple issues.”

Lynda Zhou, portfolio manager of Fidelity International, also points out that fundraising by the biggest banks related to the launch of Chinese depositary receipts (CDRs) have sucked a lot of liquidity out of the market.

That concern was reflected in the recent case of smartphone-maker Xiaomi Corp., which on June 19 shelved its much-anticipated plan to become the first company to issue CDRs on the mainland market.