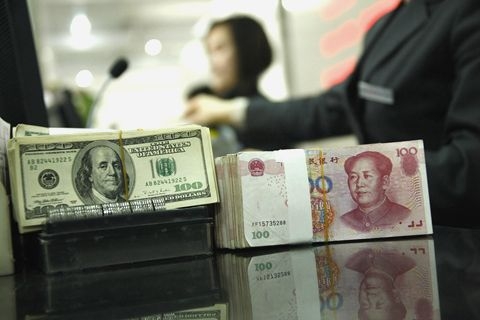 The yuan weakened against the U.S. dollar amid trade war concerns. Photo: VCG

The yuan weakened to its lowest level against the U.S. dollar in more than five months Thursday as concerns over the trade war between China and the U.S. took a toll.

In the spot market, the onshore yuan fell to a low of 6.4941 to the dollar at the close, the weakest since Jan. 11, threatening to break the 6.50 level. There’s little sign that the People’s Bank of China has taken action to stabilize the currency.

The tensions between the world’s two largest economies rattled markets this week after U.S. President Donald Trump said Monday that he planned to slap additional 10% tariffs on $200 billion of Chinese goods.

“The sentiment on the market is very poor,” a currency trader told Caixin, blaming the stronger U.S. dollar. “Currently, the short-selling power of the yuan mainly comes from the offshore market,” said the trader, who declined to give his name.

As the dollar index climbed since April 13 and closed Thursday at 95.47 against a basket of currencies, the yuan fell from 6.28 to nearly 6.50 per dollar.

“This round of yuan depreciation is a normal reaction of the market to the trade war,” said Wan Zhao, a senior analyst at China Merchants Bank’s Financial Markets Division.

As the trade frictions between China and the U.S. escalate, Chinese exports are expected to fall, pushing the Chinese currency down further, Wan said.

While the offshore market dominated the onshore rate in the past two years, the wide spread between the two markets will not be long sustainable, said Han Huishi, a currency analyst. The offshore yuan in Hong Kong eased to 6.5087 to the dollar as of 6 p.m. in Hong Kong. That narrowed the difference with the onshore currency rate to 82 basis points weaker. A basis point is .0001 yuan.

“Chances for cross-border arbitrage are low now, which will help stabilize the market jitters,” Han said.

Some analysts argued that the depreciation of the yuan may help China gain more wiggle room in the trade war with the U.S.

However, a person close to the central bank said that the devaluation may not offset the impact of U.S. tariff increases on Chinese exports and the exchange rate should be determined by the market.

China’s trade surplus with the U.S. further widened to $24.6 billion in May, according to customs data. China logged a trade surplus of $22.2 billion with its largest trading partner in April amid the ongoing trade dispute, the data showed.

“Compared with other currencies, the depreciation rate of the yuan against the dollar is not big,” the person close to the central bank said.

The outlook for the yuan is linked to the performance of the dollar index against a basket of other currencies, said a foreign currency trading executive at a major Chinese bank. Besides the trade war, positive U.S. economic fundamentals and the tapering of quantitative easing in Europe have pushed the dollar higher, the executive said.