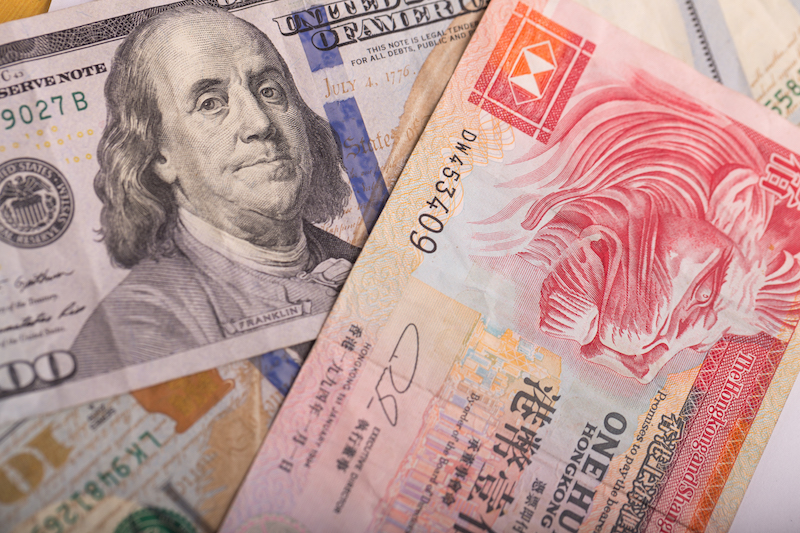 The Hong Kong dollar may hit the low end of its trading band in the coming months, analysts say. Photo: VCG

The Hong Kong dollar has continued to weaken against the U.S. dollar, pushed to fresh lows by traders seeking to profit from the widening interest rate gap between the city and the U.S.

The Hong Kong dollar settled near 7.8490 against the U.S. dollar on Tuesday. It briefly touched 7.8499 on Monday morning — its weakest level in about three decades, according to Bloomberg data.

Hong Kong linked its currency to the U.S. dollar in 1983 at a fixed rate of HK$7.8 to $1. Under a mechanism installed in 2005, the Hong Kong dollar is allowed to trade between 7.75 and 7.85 against the U.S. dollar. If it breaks the limits of the band, the city’s monetary authority must intervene.

The recent volatility is pushing the Hong Kong dollar ever closer to how far it is allowed to weaken.

Norman Chan Tak-lam, chief executive of the Hong Kong Monetary Authority (HKMA), told media on March 22 that the authority will defend the peg by buying the Hong Kong dollar and selling the U.S. dollar if the limit is touched.

Such action would cut down liquidity in the local banking system and force banks to increase their lending rates, Chan said. On the same day, the HKMA raised the city’s base lending rate by 25 basis points to 2% to match a similar increase by the U.S. Federal Reserve.

Wu Zhuoyin, an analyst at French investment bank Natixis, told Caixin that the steeper path of interest rate hikes in the U.S. has led to a widening gap between U.S. and Hong Kong rates, which encouraged traders to carry out arbitrage trading by selling low-yielding Hong Kong dollars to buy the high-yielding U.S. currency.

Expectation of a weaker Hong Kong dollar persists. In a recent report, Bank of America Merrill Lynch predicted that the currency would break the 7.85 lower limit in the second quarter, forcing the HKMA to drain HK$80 billion ($10.2 billion) from the market to boost the currency’s value.

But Zhang said the squeeze on liquidity triggered by currency depreciation will help the city rein in the overheated property market.