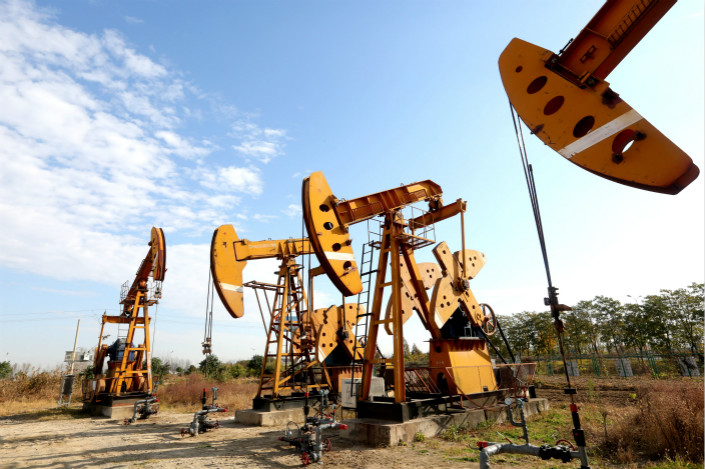 Following years of setbacks, yuan-denominated crude oil futures made their debut on March 26 in Shanghai, but underdeveloped laws and regulations for trading the contract may sideline foreign investors for the time being.

Crude oil futures listed on the Shanghai International Energy Exchange (INE), a subsidiary of the government-backed Shanghai Futures Exchange, are the first commodity futures that can be directly traded by foreign investors. Previously, financial institutions had to set up domestic branch offices if they wanted to trade in Chinese commodities.

The real significance of the contracts is that they provide a test case for opening China’s commodity futures market to foreign entities, an insider at a state-owned oil company told Caixin.

The crude oil futures contracts are meant to provide companies with a hedging tool, promote the internationalization of the yuan, and increase China’s influence on the pricing of oil.

It is part of a broader move by the Chinese government to bring in more foreign investors to its commodities exchanges and expand the country’s influence in global markets. In addition to INE, 16 other exchange around the world sell crude oil futures, but not many in the Asia-Pacific region.

“When oil prices fell sharply in 2008 and then in 2014, calls for futures products were strongest as everyone sought risk management tools,” the insider at a state-owned oil company told Caixin.

The contracts offered on INE uses medium sour crude oil, which made up nearly half of China’s crude imports in 2016. West Texas Intermediate (WTI) and London’s Brent, primarily traded on the New York Mercantile Exchange and the Intercontinental Exchange, are currently the most commonly used global benchmarks for oil prices.

Medium sour crude oil was chosen partly because it has no “authoritative benchmark” on the global market, according to a Q&A on INE’s website. It is also the main type of crude oil imported by China and neighboring countries, the exchange said.

A yuan-denominated oil futures benchmark that reflects the grades of oil that are mostly consumed by local refiners is expected to help Chinese buyers gain some control over pricing.

China also wants to encourage trading to take place in the yuan rather than the U.S. dollar, the dominant currency in the global oil market. Allowing yuan-denominated futures contracts means Chinese buyers can avoid exchange-rate risk, and its use by foreign investors would boost its credibility as a global currency.

“Domestic enthusiasm is high, but foreign institutions have been conservative as this is the first time that commodities contracts denominated in yuan have been offered to them,” a trader from a large foreign crude oil trading company told Caixin.

By March 12, only a handful of companies in Hong Kong and Singapore’s DBS Bank had signed up to participate in the trading, said Jiang Yang, vice chairman of the China Securities Regulatory Commission during an economic panel discussion on the sidelines of the “Two Sessions,” an annual meeting of China’s legislature and its main consultative body. So far, foreign participation has been limited, said Jiang, adding that overseas investment banks and oil companies are most concerned about when China’s futures law will be introduced.

The lack of legal protection provided by China’s highest courts may be one reason why foreign investors are cautious, a source from an exchange told Caixin, echoing Jiang’s statement.

Profit remittance is one area that foreign investors are particularly concerned about, said a trader from a foreign crude oil trading company. Although there is no indication that there would be a problem with direct remittances under the current rules, foreign firms are unsure if the foreign exchange regulator will step in if the amount remitted is particularly large.

The delivery process is another source of concern, the source said. At present, the six designated delivery warehouses are state-owned companies, so there is some concern that the delivery process may not be completely based on the free market.

Caixin has learned that INE plans to extend trading hours after it makes some improvements to its current technical systems.

But China is making efforts to garner interest from foreign institutions. For example, it announced it will grant income tax exemptions to overseas investors trading yuan-denominated crude oil futures days before their launch.

Launching crude oil futures is a complicated undertaking, a source from China’s securities regulator told Caixin. Developing the market will be a gradual process.

The quest for a Chinese crude oil future goes back to at least 1992, when oil futures began trading in the eastern city in Nanjing, followed by Shanghai in 1993. However, the government shut down the markets in 1994 in part due to their volatility.

Planning for a launch in 2015, Chinese authorities made progress setting up trading facilities and rules for the oil futures trade. However, a stock market crash that summer, which sent the benchmark index plummeting more than 30% in a month, put the launch on hold.

As the financial markets stabilized over the past year, the crude oil futures got put back on the table.

“Recently, we have seen a wave of interest in crude oil futures from companies, individuals and private equity firms, including many new account openings,” a general manager of the business department of a futures company told Caixin.

Airlines and transportation agencies are also important potential participants. Chinese airlines have typically used the highly liquid WTI and Brent crude oil for hedging purposes. In the future, however, they may instead choose to invest in the INE futures.

And there is hope yet for increased foreign participation.