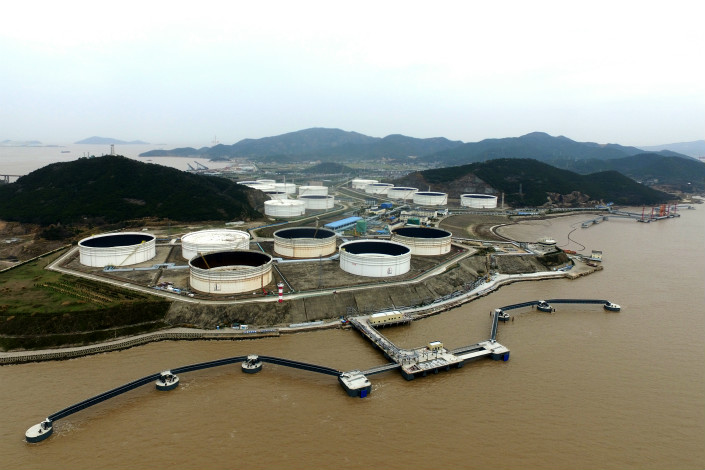 The construction site of the Shihua crude oil terminal in Zhoushan, Zhejiang province, is seen on Sunday. Photo: VCG

China will grant income tax exemptions to overseas investors trading yuan-denominated crude oil futures set to be launched in Shanghai next week in an effort to attract more foreign interest.

The Ministry of Finance, the State Administration of Taxation and the China Securities Regulatory Commission (CSRC) announced on Tuesday that the waiver will apply to both individual and institutional investors. Overseas brokerage firms won’t have to pay income tax on commissions earned on dealing in the new futures contract, they said.

The notice said the exemption for individual investors would apply for three years, but did not specify the time period for institutional investors.

China is starting crude oil futures trading and opening the market to overseas investors after years of preparation. Domestic trading started in Nanjing in 1992 and Shanghai in 1993, but the government shut down the markets in 1994 partly due to their volatility.

The country is now the world’s biggest oil consumer and importer, and that has prompted authorities to try to gain more control over the pricing of crude, which is dominated by two benchmarks — West Texas Intermediate, traded in New York City; and Brent crude, which trades on the ICE Futures Europe exchange in London.

China also wants to encourage trading to take place in the yuan rather than the U.S. dollar, the ruling currency in the global oil market. Allowing yuan-denominated futures contracts means Chinese buyers can avoid exchange-rate risk, and the use of yuan by foreign investors will help boost its role as a global currency.

Government officials have made it clear that China wants to play a bigger role in the oil market.

Fang Xinghai, vice chairman of the CSRC, which is in charge of the futures market, said last year: “When the crude oil futures contract is launched at the Shanghai Futures Exchange, Shanghai is likely to become a global hub to trade and price crude oil,” which will largely help Chinese companies better allocate world resources and hedge against market risks.

But authorities also want to avoid excessive volatility and the INE has released a series of trading regulations on its website in the run-up to the March 26 launch. These include setting margins for crude futures trading at 7% of the contract value, and imposing a daily trading band of 5% either side of the previous day’s closing price, although on the first day of trading, the limit will be set at 10% of the benchmark price.