By Fran Wang and Han Wei 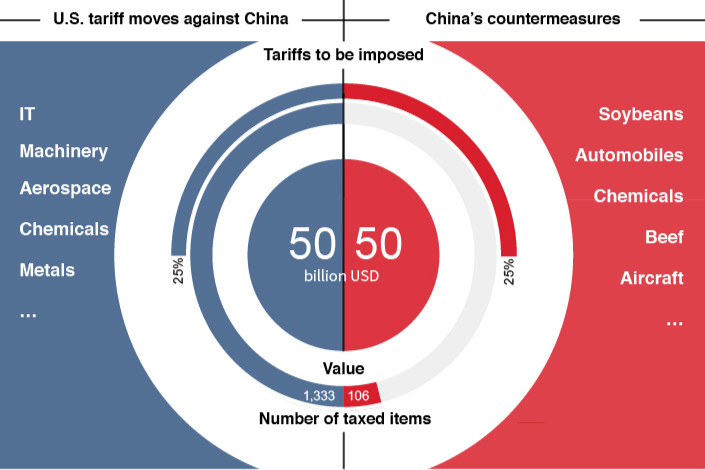 China and the U.S. traded threats of protectionist tariffs, as the world’s top two economies postured after Washington’s latest attempt to force Beijing to speed up the opening of its markets.

The U.S. on Tuesday unveiled a list of Chinese products worth a total $50 billion that will be subject to a proposed 25% punitive tariff for alleged unfair trade practices, prompting China to quickly respond with a retaliatory plan.

The list targets goods that “benefit from China’s industrial plans” such as “Made in China 2025,” which are aimed at building the country into a global leader in advanced technology, the U.S. Trade Representative (USTR) office said in a statement on Tuesday. The list covers 1,300 product lines that include chemicals, metals, aircraft parts, telecommunication equipment and weapons.

China responded hours later with a vow to introduce measures of “equivalent strength and equivalent scope” against American products.

The country will impose a new 25% tax on 106 American product lines, including soybeans, cars and chemical goods. The policy will become effective “pending the implementation of additional tariffs on Chinese products by the U.S. government,” the Ministry of Finance said in a statement on Wednesday.

“We have to make it clear that our move was forced and was made with restraint,” he said. “If some people insist on a trade war, we will fight through to the end. But if some people are willing to talk, our door is open.”

The U.S. move came after President Donald Trump last month said his administration will slap new annual tariffs on imports from China to punish the country for what it claims is forced technology transfers, following a seven-month investigation into alleged intellectual property theft by Chinese companies. The U.S. justified the tariffs under the rarely used Section 301 of the Trade Act of 1974.

The total value of the Chinese products that will be affected by the tariff increase is commensurate with the estimated “harm caused by China’s unreasonable technology transfer policies to the U.S. economy,” according to the USTR statement.

Trump has been pressing Beijing to cut China’s trade surplus with the U.S. by $100 billion annually. The U.S. held a record $375.2 billion deficit last year with China, up 8% from 2016, according to U.S. Department of Commerce data.

Trump has also pushed China for greater market access for American firms, which partly drove Beijing to promise to implement measures this year to open the country’s financial sector wider to overseas investors.

The USTR announcement fueled concerns about whether trade tensions between the two countries could further escalate, although bilateral negotiations to settle the dispute are most likely to accelerate, Tai Hui, chief market strategist for Asia Pacific with J.P. Morgan Asset Management, said in a note on Wednesday.

“As we have seen in other trade actions, a number of measures are likely to be negotiated or removed altogether,” he said. “This Sino-U.S. trade tension could go through several rounds in coming years. This could encourage investors to focus on sectors and markets in Asia that are more dependent (on) domestic demand, boosted by structural growth, and less exposed to trade disputes.”

China’s Ministry of Commerce said Wednesday the country will “immediately” bring the U.S. to the dispute settlement mechanism under the World Trade Organization.

“China may negotiate with the U.S. while taking countermeasures. If the U.S. does not make a concession, China will fight back. … If it drops the tariff plan, China will step back too,” He Weiwen, a senior researcher with the Commerce Ministry’s China Association of International Trade, told Caixin.

“This is to seek cooperation through fighting,” said He, who is a former economic and commercial counselor at the Chinese consulates in San Francisco and New York.

He warned that both the Chinese and American economies, as well as other countries and regions on the industrial chain involving the two nations, would be harmed if the tariffs were to go through, and that the global multilateral trading system would “take a major blow.”

Beijing has already released a plan to impose taxes on $3 billion worth of American imports, including fruit, wines, pork and seamless steel tubes in response to U.S. tariffs of 25% on steel and 10% on aluminum products imported from countries including China. Those tariffs are unrelated to the list announced by Washington on Tuesday. Some of the Chinese levies took effect on Monday.