China Strikes Back Against Trump Tariffs 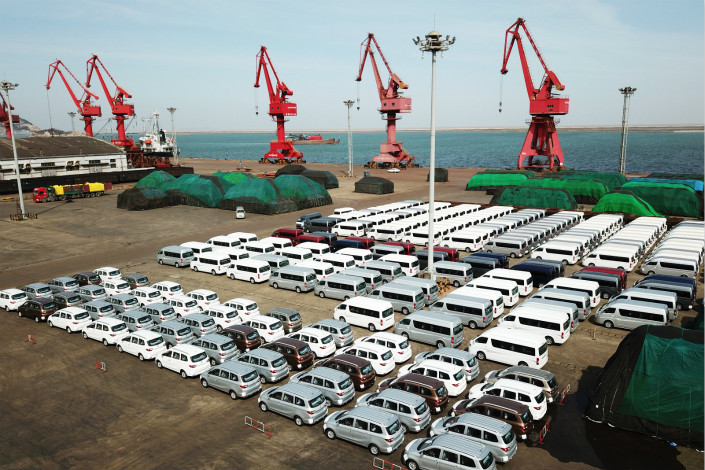 Domestically made cars await export at the port of Lianyungang, Jiangsu province on March 5. Photo: VCG

China has hit back against U.S tariffs on metal products by slapping tariffs on 128 U.S. goods, the Ministry of Commerce said in a statement on Monday.

The Commerce Ministry said it suspended its “concession list,” which reduces tariffs on U.S. goods (link in Chinese) as a commitment to the World Trade Organization. In effect, the change imposes a 15% import tax on $977 million worth of American fresh fruits, nuts, wines, and seamless steel tubes, and a 25% levy on $1.99 billion in U.S. pork, recycled aluminum and other goods.

The ministry had laid out the tariffs in a reprisal plan unveiled on March 23, which received a cascade of domestic support during the public comment period that ended on Saturday.

China’s move came amid growing fears over a trade war between Beijing and Washington after U.S. President Donald Trump threatened last month to impose more tariffs on up to $60 billion worth of a wide range of Chinese goods.

The U.S. government had imposed a 25% tariff on imported steel and 10% on aluminum products earlier in March on the grounds of national security, which the commerce ministry said has only targeted a minority of countries and “severely damaged China’s interests.”

The ministry said cooperation between the world’s two largest economies is the “only correct choice,” adding that it hopes U.S. will soon revoke its protectionist measures that run afoul of World Trade Organization rules and help to put trade relations between the parties back on the right track.