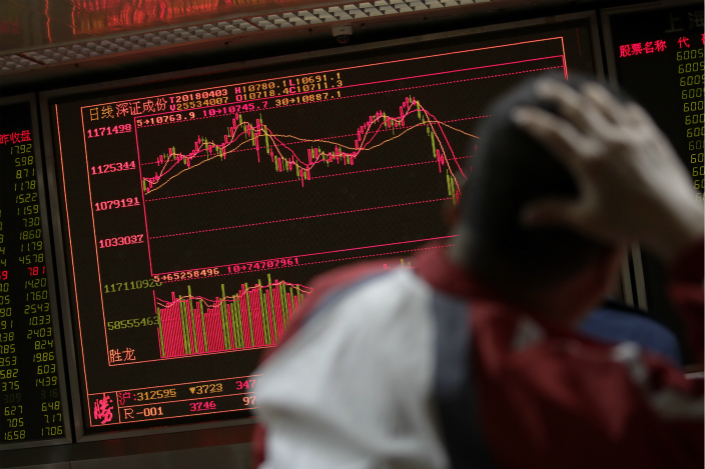 *Over 1,000 stocks dropped by the 10% daily limit on the Shanghai and Shenzhen bourses Tuesday

*The drops were precipitated by margin calls amid a tight domestic liquidity situation, though Sino-U.S. trade tensions have also played a role

(Beijing) — Chinese mainland shares tumbled on Tuesday with the benchmark stock index closing at its lowest point in nearly two years as trade tensions escalated between the U.S. and China over the long weekend.

The Shanghai Composite Index plunged 3.78% to 2,907.82 — the gauge’s worst drop since Feb. 9. More than 1,000 stocks, or one-third of those listed, dropped by the 10% daily limit on both the Shanghai and Shenzhen exchanges, sending the benchmark below the 3,000 point mark for the first time since September 2016.

Among large caps, electronics-makers and financial companies led the losses, but small caps were hit harder. The Shenzhen Component Index, which tracks many small and midsize technology companies, plummeted 5.31% on the day.

Caixin earlier reported that more and more domestically listed companies, which have found it harder to borrow lately, have seen their stock prices plummet to levels that could trigger the forced sale of shares pledged by their controlling shareholders as collateral. Once these margin calls are triggered, share prices often tumble further.

The central bank on Tuesday morning injected 200 billion yuan ($31.1 billion) into the financial system via its medium-term lending facility to ease the market’s liquidity concerns. However, it didn’t improve sentiment, which took a hit in the morning after well-known smartphone-maker Xiaomi Corp. shelved its much-anticipated plan to issue Chinese depositary receipts so its shares could be traded on domestic exchanges.

Also affecting the market’s mood was news that the U.S. passed a bill that would reimpose a ban on American component purchases for the Chinese telecom-equipment maker ZTE Corp., threatening the company’s survival.

The ups and downs of the recent trade turbulence between the U.S. and China have rattled domestic stocks this year. The Shanghai index has taken major losses on three days since U.S. President Donald Trump announced his initial plan on March 22 to slap tariffs on Chinese goods.

On Monday, Trump threatened to impose tariffs on another $200 billion in Chinese exports to the U.S. In a statement on Tuesday morning, China’s Commerce Ministry blasted the tariffs as “extortion.”

The statement came after Trump administration’s announcement on Friday that it will impose a 25% tariff on $50 billion in Chinese exports. China, claiming the U.S. had “launched a trade war,” responded the same day, outlining tariffs on U.S. goods worth $50 billion.

“China’s economy has already been clouded by a sharp slowdown in fixed-asset investment growth due to the government’s deleveraging drive. … The rising risk of a disruptive trade conflict makes a bad situation tentatively worse,” Nomura Securities Co. said in a note on Tuesday. “With this potential double whammy, we believe Beijing will very likely introduce further easing measures in the months ahead.”