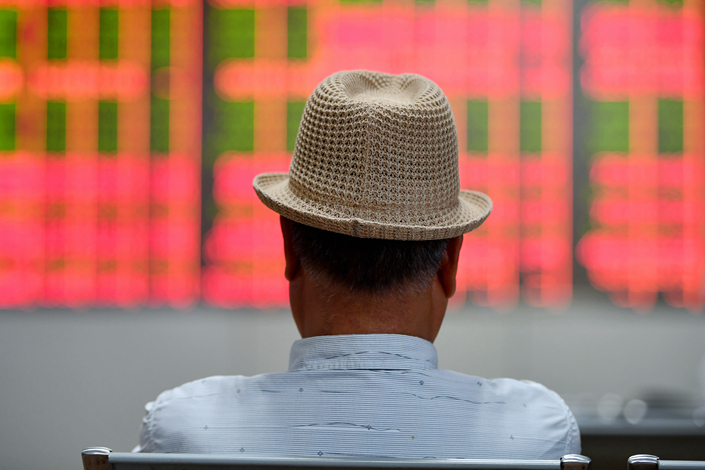 A man watches stock price changes at a securities brokerage in Jinhua, Zhejiang province on May 17. Photo: VCG

Chinese stocks started the week with brisk gains on Monday as investors breathed a sigh of relief after Beijing and Washington jointly released a statement over the weekend saying the two sides had reached a consensus that would avert a threatened trade war.

The Shanghai Composite Index rose by 0.77% by the noon break on the first trading day after the announcement, rebounding above the key 3,200 level and reaching its highest level since March 22. The Shenzhen Component Index gained 1.03%, while Hong Kong’s Hang Seng Index, which is more intricately linked with the global financial system, surged 1.27% by noon.

The U.S. had previously threatened to levy protective tariffs on up to $150 billion worth of Chinese imports unless Beijing took action to reduce the two countries’ trade imbalance and do more to protect intellectual property rights. Beijing responded with threats to levy its own retaliatory tariffs on U.S. imports.

Vice Premier Liu He, President Xi Jinping’s special envoy to head China’s delegation for a second round of trade talks in Washington, said on Saturday the two sides had reached consensus for developing a healthy trade relationship, the Xinhua News Agency reported. His counterpart, U.S. Treasury Secretary Steven Mnuchin, told "Fox News Sunday" that the U.S. had “agreed to put the tariffs on hold” and “try to execute the framework."

The threats roiled global markets since they first began in late March. The benchmark Shanghai index sank by as much as 6% over three weeks starting March 22, followed by a sell-off in U.S. markets, on fears of a full-blown trade war between the world’s two largest economies.

“With elimination of the largest uncertainty in the market since March 22, stocks are likely to rebound to the level before the tariff announcement,” said Xun Yugen, chief strategist of Haitong Securities Co. Ltd.

Construction materials, energy companies and financial shares were active on Monday morning, with Baotou Iron and Steel Group gaining 2.98% and Yantai Xinchao Industry Co. up by 2.67%. Sentiment was also lifted by the Hainan provincial government’s Sunday announcement that it would develop horse racing industry, with China Hainan Rubber surging by 8.9%.