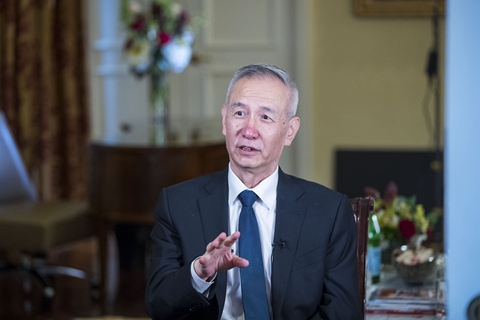 Chinese Vice Premier Liu He at an interview in Washington on Saturday. Photo: Xinhua

China and the U.S. have agreed to avoid a trade war and refrain from imposing protective tariffs on each other, Chinese Vice Premier Liu He told the media on Saturday in Washington.

Liu made the remarks shortly before the Chinese trade talks delegation he led jointly issued a statement with the U.S. on “substantially” reducing the U.S. trade deficit, particularly by increasing U.S. exports of agricultural and energy goods to China.

Liu, who was also President Xi Jinping’s special envoy to head China’s delegation in the two-day trade talks in Washington last week, said the two sides have reached consensus in developing a healthy trade relationship, according to a report from the official Xinhua News Agency.

China and the U.S. will strengthen cooperation in energy, agriculture, healthcare, technology, finance and other areas, Liu said.

The U.S. will send a team to China to work out more details.

The two sides also talked about creating favorable conditions to expand trade in manufactured goods and services, according to the joint statement.

U.S. President Donald Trump had threatened to impose tariffs on up to $150 billion on Chinese goods to combat what his administration says is Beijing’s misappropriation of U.S. intellectual property through joint venture requirements and other policies that force technology transfers.

Beijing denies such coercion and has threatened equal retaliation, including tariffs on some of its largest U.S. imports - among them aircraft, soybeans and autos.

During an initial round of talks earlier this month in Beijing, Washington demanded that China reduce its trade surplus by $200 billion — a figure most economists say is impossible to achieve because it would require a massive change in the composition of commerce between the two countries.

As of late Thursday, U.S. officials were still pressing China to agree to that size reduction.

But economists say that level would be extremely difficult to achieve, especially as U.S. tax cuts are spurring demand for more imports. The $200 billion figure is equivalent to about 90 percent of Boeing Co.’s annual aircraft production and is larger than all of the United States’ global annual agricultural and oil exports.

“It is a very limited and tentative agreement mainly designed to deescalate tensions,” Prasad said of the joint statement.

There are concerns among some legislators and trade experts that Trump could give priority to a narrower trade deficit over tackling what they say is China’s abuse of intellectual property rights. Any deal under which China would import more goods could easily be reversed, economists say.

The statement made no mention of whether there would be a relaxation of paralyzing restrictions on Chinese telecommunications equipment maker ZTE Corp. imposed last month by the U.S. Commerce Department.

The action, related to violation of U.S. sanctions on Iran, banned American companies from selling semiconductors and other components to ZTE, causing the Shenzhen-based company to cease operations.

Earlier this week, Trump tweeted that he directed the Commerce Department to put ZTE back in business and said the company’s situation was part of an overall trade deal with China.