Opinion: Trump Is the Gift That Keeps on Giving — to China 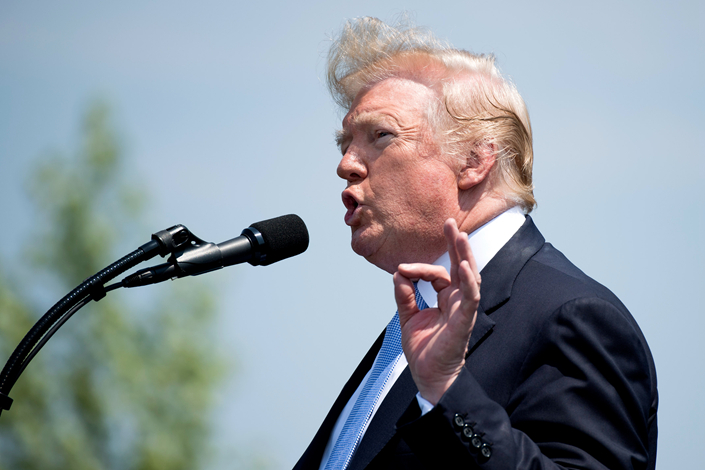 U.S. President Donald Trump at a speech on May 15 in Washington, D.C. Photo: VCG

All bad management, a business guru once remarked, is taught by example. Donald Trump is teaching a master class on how not to serve as America’s chief executive. By abandoning the thoughtful policymaking of his predecessors in favor of a presidency modeled on reality TV, Trump has failed to articulate anything resembling a credible national strategy.

Instead, what Trump has delivered during his first 16 months in office is a blow to American influence, most notably in Asia. Trump’s misguided economic nationalism — embodied in new sanctions, tariffs, and scuttled trade deals — has weakened the United States in the Pacific Rim and created fresh opportunities for America’s adversaries. Trump’s threatened trade war with China is a case in point.

To be sure, China’s predatory economic practices must be challenged. In reneging on promises of reform and further market opening, the government is reinforcing the state sector against foreign competition while ignoring intellectual property theft. But confronting China will require allies; Trump’s approach will only leave the U.S. more isolated.

Even a cursory examination of China’s economic ties with America’s Asian allies illustrates just how ineffective Trump’s attacks on free trade will be. China is the economic heart of Southeast Asia, accounting for 21% of the region’s exports in 2015. China is also the region’s largest importer, with much of the trade from neighboring countries comprising electronics and machinery, underscoring China’s role as Asia’s “processing hub.”

Compare these numbers to Southeast Asia’s trade with the U.S., Europe, and Japan: In 2015, imports from these economies accounted for over 25% of the region’s total — only slightly more than China’s share. Elsewhere in the region, 25% of South Korea’s exports go to China. For Australia, which counts China as its most-important trade partner, the share is 28%, compared to just 7% for the U.S., Australia’s third-largest export market.

The political implication of these figures is obvious: China is now Asia’s playmaker, and the U.S. is taking a seat on the bench. Seven of the 11 countries that signed the Trans-Pacific Partnership — the Obama-era initiative to expand trade with Asia that Trump rejected during his first month in office — are now participating in the Regional Comprehensive Economic Partnership, China’s rival trade pact. All 10 members of the Association of Southeast Asian Nations (ASEAN) are at the table, along with Australia, New Zealand, South Korea, Japan, and India, which have free-trade agreements with ASEAN.

Australia is a good example of a U.S. ally whose leaders share America’s concerns about China’s rising power but also understand the economic imperative of staying in China’s graces. Exports of natural resources, like iron and coal, account for roughly 20% of Australia’s gross domestic product (GDP) and dominate its economic relationship with China. Australians rightly worry about becoming collateral damage in Trump’s bilateral trade dispute.

The consequences of Trump’s trade strategy aren’t confined to Asia. In Latin America, Trump is not only harming American competitiveness; he is also helping Chinese players establish themselves. While the U.S. remains the region’s leading trade partner, its rising protectionism is allowing China to leverage its economic clout to expand its presence and influence. China now ranks in the top five export markets for 12 of Latin America’s 20 countries, and is the region’s biggest customer for raw materials. And Latin America is second only to Asia in terms of Chinese investment. Over the past decade, China has committed $140 billion in loans to the region, and President Xi Jinping has pledged $250 billion in direct investment by 2019.

Trump seems oblivious to the fact that his protectionism has only made China’s work easier. As Trump threatens to renegotiate NAFTA “forever,” slashes foreign aid, and plans border walls, his counterpart is emerging as the global champion of free trade and multilateral cooperation. Xi has visited Latin America three times since 2014, and in January, China announced that Latin America will be included in China’s massive Belt and Road Initiative. The message to the region is clear: China is here, and it intends to stay.

Whatever Trump expects from his trade bluster, the effect on American influence around the Pacific Rim — and beyond — should not be underestimated. While China’s authoritarian regime faces major challenges in translating its economic might into soft power, its leaders are clearly benefiting by advocating for open global trade.

Previous U.S. presidents have worked hard to craft an integrated economic and strategic approach to America’s relationship with Asia. In contrast, Trump is pitting the U.S. against its Asian allies. Closing this rift will not be easy. Ironically enough, when the time comes to repair the damage, Trump’s campaign vow — “America First” — will point to where American leaders need to begin.

Kent Harrington, a former senior CIA analyst and director of public affairs, served as national intelligence officer for East Asia and chief of station in Asia.