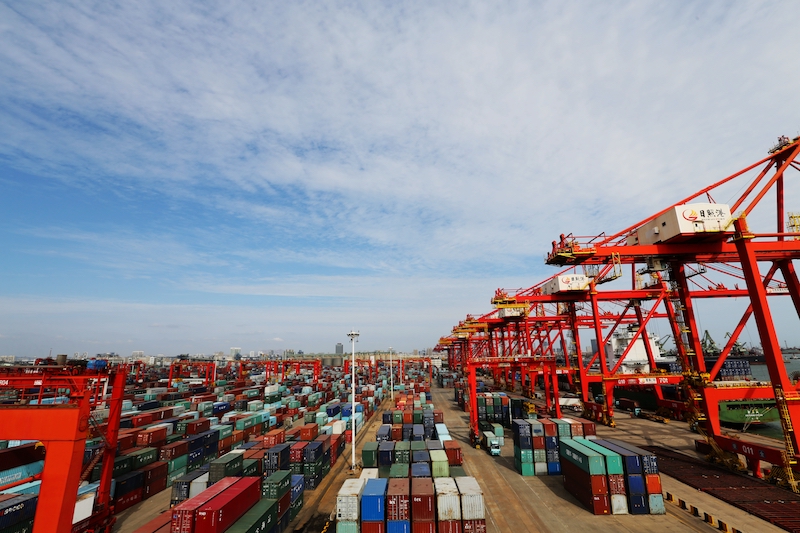 Containers stock in the Port of Rizhao, Shandong province, in October. Photo: VCG

(Reuters) — The United States and China were scheduled to hold a second round of trade talks on Thursday to try to avert a damaging tariff war, with the Trump administration demanding a $200 billion cut in China’s U.S. trade surplus and greater protections for intellectual property.

U.S. President Donald Trump has threatened to impose up to $150 billion in punitive tariffs to combat what he says is Beijing’s misappropriation of U.S. technology through joint-venture requirements and other policies. Beijing has threatened to retaliate, including tariffs on some of its largest U.S. imports, including aircraft, soybeans and autos.

White House spokeswoman Sarah Sanders said Trump will meet with the head of the Chinese delegation, Vice Premier Liu He, later on Thursday.

At talks in Beijing two weeks ago, both sides presented lengthy lists of demands, agreeing only to keep talking.

The Trump administration sought a $200 billion reduction in China’s $375 billion U.S. goods trade surplus; an end to joint venture requirements that it says coerce technology transfers from American companies; and an end to subsidies for advanced technology industries under the “Made in China 2025” program.

Trump on Sunday wrote on Twitter he will help put ZTE back in business after a U.S. Commerce Department ban cut off its supply of American components, forcing it to suspend operations.

In tweets on Wednesday, Trump linked ZTE’s situation to a larger trade deal and said that Beijing has “much to give” Washington on trade, denying suggestions his administration was “folding” in negotiations with China.

“Nothing has happened with ZTE except as it pertains to the larger trade deal,” Trump wrote on Twitter.

Top White House economic adviser Larry Kudlow told the Fox Business Network cable channel on Thursday that the discussion over ZTE was about re-examining the U.S. penalties, not waiving the enforcement action altogether.

Trump wrote on Twitter: “We have not seen China’s demands yet, which should be few in that previous U.S. Administrations have done so poorly in negotiating. … The U.S. has very little to give, because it has given so much over the years. China has much to give!”

Kudlow, in his interview with Fox Business, said the White House expected China to bring a proposal to the talks that would “extend the conversation and permit additional negotiations.”

The discussions get underway with some drama as the White House’s harshest China critic, Trump trade adviser Peter Navarro, was relegated to a supporting role amid a growing rift with U.S. Treasury Secretary Steven Mnuchin.

Navarro will be present at the meetings, but the White House said they will be led by Mnuchin, Commerce Secretary Wilbur Ross and U.S. Trade Representative Robert Lighthizer. The Chinese side will be led by Vice Premier Liu He, the top economic adviser to Chinese President Xi Jinping.

Navarro, author of the book “Death by China,” has been a major advocate of punitive tariffs on Chinese goods.

He attended the initial talks in Beijing but had an angry exchange with Mnuchin on the trip, a person familiar with the incident said.

The Washington talks will start as the U.S. trade representative finishes up public hearings on the first batch of U.S. tariffs on $50 billion worth of Chinese goods proposed as punishment for alleged violations of U.S. intellectual rights.

The tariffs, which target Chinese electrical and machinery parts, autos and flat-screen television sets, could take effect in early June, and may be followed by an additional round that target $100 billion worth of goods yet to be identified.

Liu started his visit in Washington by meeting with trade-focused U.S. lawmakers on Wednesday, listening to their concerns and telling them he will work hard to address problems in the U.S. trade relationship.

“He recognizes there are problems in this trade relationship,” said Republican Representative Kevin Brady, chairman of the House of Representatives’ Ways and Means Committee. “And his hope for this trip was to begin to address the trade imbalance, increasing demand of Chinese consumers for U.S. products, as well as to begin to take steps on the structural reforms.”

Read more about China-U.S. trade turbulence, click here
Share now and your friends will read it for free!
Share this article
Open WeChat and scan the QR code
RELATED
MOST POPULAR
GALLERY
SPONSORED