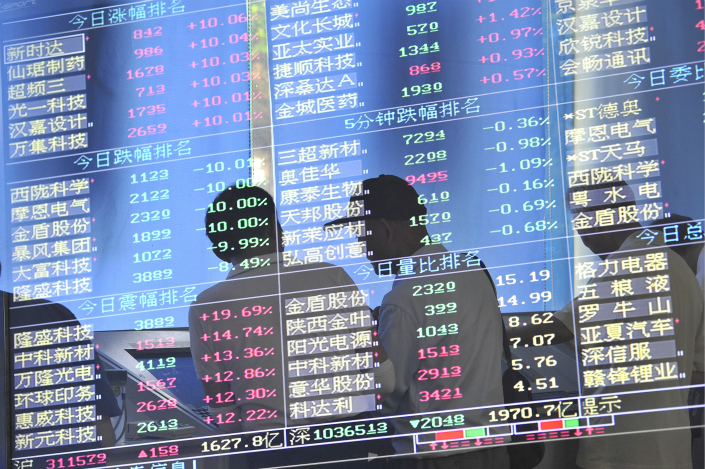 Pledging stock to borrow from brokerages was a popular financing approach, but the business has been contracting since regulators upped financial institutions' mandatory risk controls. Photo: IC

Shares of over 10 listed companies have plummeted over recent month to levels that could trigger the forced sale of the stock pledged by their controlling shareholders as collateral.

The situation underscores growing risks in the loan business after regulators tightened their grip on the practice as part of a national deleveraging campaign.

Telecommunications solution provider Boomsense announced in a filing with the Shenzhen bourse Tuesday that some of its stock pledged by its controlling shareholder as collateral for loans has been subjected to margin calls by creditors due to a continued fall in the share price. The problematic shares account for 17.8% of the firm’s total.

When a margin call is triggered, the borrower must either deposit more cash or securities with the lender as additional collateral, often a brokerage, or sell the shares pledged to settle the loan. However, the forced sale of the pledged stock could lead the company’s share price to tumble further.

Boomsense, which closed at 7.17 yuan ($1.12) per share on Monday, has lost about half of its value since January. Its shares have been suspended from trading since Tuesday.

Pledging stock to borrow from brokerages was one of the most popular financing approaches used by major shareholders of Chinese listed companies. But the business has been contracting since the country’s regulators recently tightened requirements on financial institutions’ risk controls due to a spike in the number of margin calls sparked previously, a senior executive with an outlet of a securities firm told Caixin.

Brokerages have become reluctant to lend against pledged shares, charging high interest rates while granting loans that are much smaller than the market value of the pledged stock because “risks are rising,” she said. That has strained the financial chain of major shareholders of many listed companies, she added.

In an example that illustrates why brokerages have grown so jittery, China’s securities regulator has banned Western Securities Co. Ltd. from conducting stock repurchase deals for six months due to its flawed handling of a pledged-stock loan for embattled tech giant LeEco. The deal could cause the brokerage, based in the northwestern city of Xi’an, to incur losses of 439 million yuan.

In January, authorities published new rules governing pledged-stock loans, capping the amount of any stock on the A-share market that can be pledged at 50% of the company’s outstanding equity.