By Zhang Qi and Leng Cheng 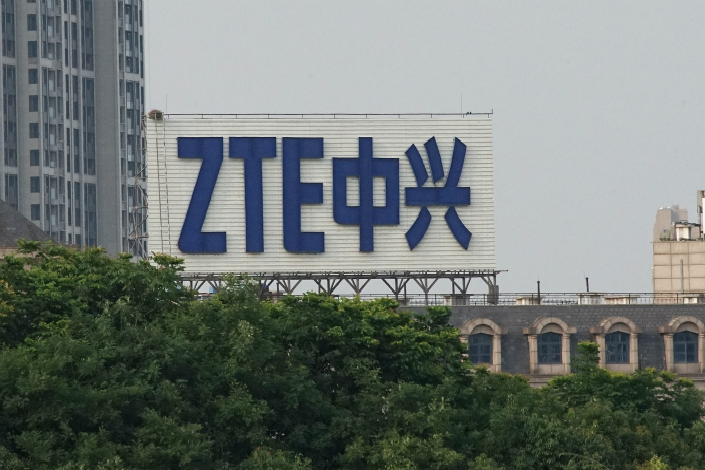 *ZTE Corp.’s shares dropped by nearly 25% for the day in Hong Kong and by the 10% daily limit in Shenzhen soon after opening

*It is not yet clear whether the U.S. Senate bill will be signed into law in its current state, as it will first need to overcome several procedural hurdles and presidential opposition

(Beijing) — Shares of ZTE Corp. plunged on Tuesday in Hong Kong and Shenzhen after the U.S. Senate passed a bill that would reimpose a ban on American component purchases for the Chinese telecom-equipment maker.

Shares of ZTE had plunged by 24.8% in Hong Kong for the day, while its Shenzhen-listed shares slid by the 10% daily limit soon after the trading kicked off. ZTE’s stock has been in a free fall since it resumed trading on Wednesday as investors have dumped shares due to uncertainty over whether the company can stay in business. The company has so far lost 61.5% of its value in Hong Kong and 34.4% in Shenzhen since the trading resumption.

On Monday, investors’ wariness grew as the U.S. Senate included the reinstated ban on sales of U.S. components to ZTE in a $716 billion defense bill that it passed.

If the bill were to become law, it would reverse a Trump administration deal to allow ZTE to resume buying components from the U.S., putting ZTE’s survival once again in question. But the Senate bill faces several major obstacles before it can become law, making such an outcome far from certain.

The bill also would ban the federal government from buying or renting equipment from ZTE and another Chinese telecommunication giant, Huawei Technologies Co. Ltd., as well as providing any form of subsidies to the two firms and their subsidiaries.

In a joint statement that included both Republicans and Democrats, Senators Marco Rubio, Chuck Schumer, Chris Van Hollen and Tom Cotton said the bill “made it clear that protecting American jobs and national security must come first when making deals with countries like China, which has a history of having little regard for either.”

“It is vital that our colleagues in the House keep this bipartisan provision in the bill as it heads towards a conference,” the statement said.

In response, Trump is moving to negotiate with the Senate, according to media reports. Bloomberg News cited anonymous sources who said that Trump will meet with House Republican lawmakers on Tuesday and Senate Republicans on Wednesday to find a way to keep the deal.

It is very possible that Trump will be able to keep the deal because the bill still needs to pass several procedural hurdles before it gets to the president’s desk and then still needs to maintain enough support to override a veto, according to people watching the matter.

For the Senate bill to become law, it first would have to be “reconciled” with the U.S. House’s version of the same bill, and the House version does not have the ZTE provision. Even if the House and Senate versions were to be reconciled, the bill would go to Trump for his signature. If he were to veto the bill instead of signing it, a two-thirds vote in both chambers would be necessary to override Trump.

“Any law requires the signature of the president, but Trump is unlikely to sign such a law to reversing the decision made by his own administration — unless he was forced to sign because he wants to pass the rest of the bill,” said Doreen Edelman, a global trade attorney with law firm Baker Donelson.

ZTE got in trouble with the U.S. government after repeatedly violating U.S. sanctions aimed at curbing Iran’s nuclear program. The Trump administration had originally ordered a seven-year ban on the sale of U.S. components to ZTE in April, a move that the company said threatened its survival.

The administration later relented, reaching a new settlement with ZTE that included a $1 billion fine. However senators have questioned the deal since it was made, with several arguing that a deal between the U.S. government and ZTE won’t fundamentally resolve the national security concerns brought by ZTE’s business.