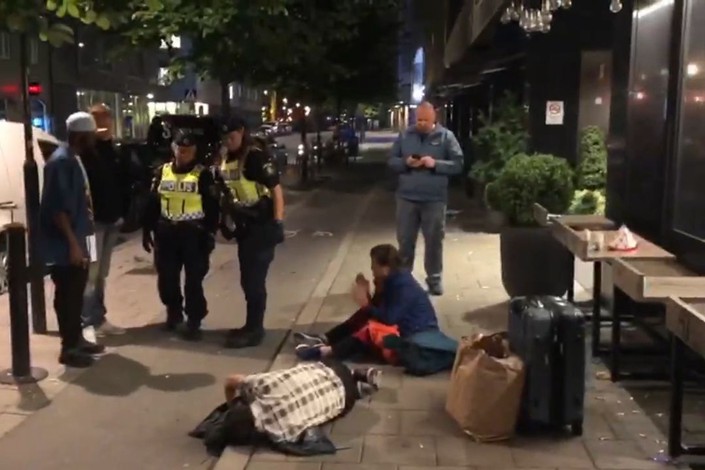 Zeng's mother and father sit outside a hostel in Sweden after police removed them from the premises.

A hostel dispute involving Chinese tourists in Stockholm has escalated into a diplomatic spat between China and Sweden.

The Chinese government on Monday demanded answers from Swedish police over what it called the “brutal” treatment of three Chinese tourists who earlier this month got into a dispute with a hostel in the Swedish capital.

China “hasn’t received a report from Sweden about the progress of the investigation, and the Swedish police have not responded to the Chinese Embassy’s request for a meeting to exchange information,” Chinese Foreign Ministry spokesperson Geng Shuang said Monday at a regular news briefing. “This is against common diplomatic practice.”

But Sweden chief prosecutor Mats Ericsson told local media Monday that an investigation has shown that the police officers did nothing wrong in their handling of the Chinese tourists.

The incident came to light when the Chinese media ran reports about it on Saturday. A man surnamed Zeng said he and his parents were removed by police from a hostel and deposited a few kilometers away.

Zeng told Chinese media that he accidentally booked their stay in the Generator Stockholm hostel for Sept. 2, when he meant to choose Sept 1. When the tourists arrived in the hotel near midnight on Sept. 1 and were told there were no available rooms, Zeng said he asked the staff if they could stay in the lobby. He said he was concerned about the safety of the area and told hostel staff his father was taking medication.

The hostel staff allowed them to stay for a short while then asked them to leave, Zeng said. When Zeng and his parents refused to leave, hostel staff called police, who physically removed them and reportedly took them to the Skogskyrkogården metro station, which is about 7 kilometers (4.3 miles) from the hostel and adjacent to a park containing a historic cemetery.

The police told one of Sweden’s largest newspapers, Aftonbladet, that they arrived at the hostel at 1:43 a.m. and didn’t believe that the tourists were sick as Zeng claimed. They believed that the family intended to remain in the lobby until dawn, so they decided to remove them, the Aftonbladet report said.

Videos circulating online, allegedly shot by Zeng and a passer-by, showed a person — apparently Zeng’s father — being carried by his arms and legs by two police officers. Another clip showed an elderly woman, who appears to be Zeng’s mother, sitting on the ground and calling out for help. A third clip shows Zeng throwing himself on the ground and wailing.

The Chinese Embassy in Sweden reacted strongly to the incident, issuing a statement on its website on Sept. 15 saying it is “deeply appalled and angered” by what happened and “strongly condemns” the police actions.

It also issued a travel alert on Friday warning Chinese travelers about the “brutal treatment” of Chinese tourists by Swedish government employees, accompanied by normal warnings about pickpocketing in the Swedish capital.

In an interview with Aftonbladet, Chinese Ambassador Gui Congyou insisted the police violated the human rights of Chinese citizens and still owes China an explanation.

“We are puzzled and shocked that the Swedish police’s brutal treatment of three Chinese tourists took place in a country that talks about human rights and justice everyday,” Gui told the newspaper. The full text of the interview was published in Chinese on the embassy’s website. Gui said the three Chinese citizens did not break Swedish law and they didn’t deserve the treatment the received.

Gui said that an average of two thefts involving Chinese citizens are reported every day in Stockholm, which is why the embassy issued its usual safety alert. He also claimed that none of the cases have been solved by Swedish police.

The Swedish embassy in China published a statement Sunday on its official Weibo, a Chinese equivalent of Twitter, saying that Swedish authorities have appointed special prosecutors to investigate whether there was improper or illegal conduct by the police, after receiving complaints.

However, Swedish prosecutor Ericsson told Aftonbladet on Monday that no preliminary investigation had been initiated because the assessment was that there was “no crime on the part of the police.”

“They (the tourists) acted as disturbing by refusing to leave a place where they were not entitled to be,” Ericsson said. “The police have the right to remove someone from one place to another, and it is an extremely common and standardized police procedure to do so.”

The incident has sparked buzz at Chinese social media platforms with debate about the behavior of the tourists and about their compatriots’ behavior while traveling overseas.

While some people expressed sympathy on Chinese social media platforms for the Chinese family, others argued that Zeng and his parents were in the wrong.

“They may think they are still in China, where you may flout the rules by faking illness or crying out loud, but you are in another country,” one Weibo user commented online.

As China’s economy keeps growing, an increasing number of Chinese people are heading abroad for leisure in recent years. Chinese citizens made 71 million overseas tours in the first half of this year, up 15% over the same period last year, government figures show.

The behavior of these tourists is a regular topic of discussion online in China. Reports of littering, wasting food, vandalism and rowdy behavior are often criticized, with many calling for Chinese tourists not to “lose China’s face” while on vacation.