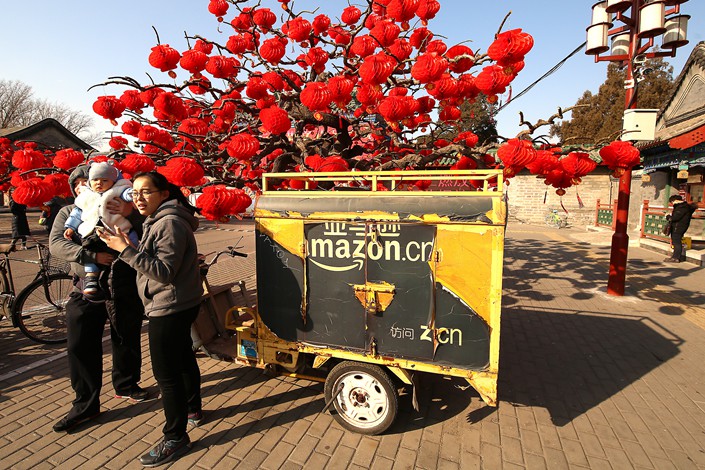 A China Amazon delivery vehicle is parked outside a Beijing park on Feb. 5. Photo: VCG

Many practices that prompted global e-commerce giant Amazon.com Inc. to launch a corruption probe at its China operations are rampant on the nation’s rough-and-tumble internet, numerous industry players and observers told Caixin.

They described an online world of e-commerce where independent merchants regularly use fixer-type intermediaries to help clear negative customer reviews from their shops, create false sales to boost their transaction volumes and reopen stores that have been shut down for violations. The problems have proved a regular headache not only for Amazon, but also for market leaders Alibaba Group Holding Ltd. and JD.com Inc., which have set up special teams just to combat the problem.

Amazon’s internal corruption probe was first detailed earlier this week by the Wall Street Journal, which reported the e-commerce giant was investigating suspected data leaks and employees who were allegedly bribed to assist in practices like erasing negative reviews. The report said the problem was particularly pronounced in China, partly due to the ballooning number of merchants on Amazon’s platforms and also relatively low pay that might embolden employees to take such risks.

An Amazon representative in China confirmed to Caixin that such a local investigation was taking place, and that employees found to have violated rules would be dealt with according to company policies, including possible termination. Any outsiders found to have illegally obtained Amazon information could also have their accounts closed, comments about their shops deleted and deposits confiscated, the representative added.

Many representatives involved in China’s vibrant e-commerce world confirmed that the kind of behavior described by Amazon and others is rampant on the Chinese internet, the product of stiff competition and historically lax practices among major domestic site operators that tacitly tolerated such behavior.

A merchant in the city of Foshan in South China’s Guangdong province recalled one typical instance where another merchant was shut down by Amazon for faking sales. That merchant then turned to an intermediary who collected a fee equivalent to several thousand dollars, then got the account reopened using the assistance of an insider at Amazon.

Part of the problem has arisen from the explosion of merchants on Amazon, as a wide array of sellers hawk their various wares. In the first 11 months of last year the company registered about 1 million merchants on its sites worldwide, nearly a third of those in China, according to a media report. With so many merchants, some could go for days without any transactions, hurting their ratings due to low activity volume.

“Opening a store on Amazon has gone from being a ‘blue ocean’ to a ‘red sea,’” the Foshan merchant said, explaining the dilemma faced by many Chinese merchants on Amazon’s sites due to overcrowding.

Another Beijing merchant said that others are forced to resort to such practices because they risk getting crushed by the competition if they don’t. “If other people get traffic from fake orders, if you don’t do it and they do, your store will become an outpost, all your business will go to others who use the ‘black hand’ middlemen.”

As the problem has worsened, many of China’s major e-commerce operators have set up internal teams to try to root out corruption within their midst and on their platforms. Online search leader Baidu Inc. reported at least 57 cases of such corruption between 2010 and 2017, while JD.com reported at least eight and Alibaba at least six.