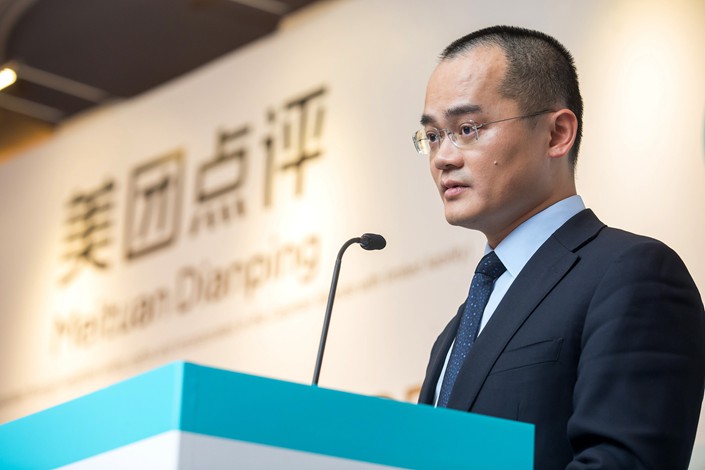 Wang Xing, co-founder and CEO of Meituan Dianping, speaks during a press conference in Hong Kong on Sept. 6. Photo: VCG

Some call entrepreneur Wang Xing a cloner because the startups he founded in China were mostly copycats of U.S. peers. His latest endeavor, Meituan-Dianping, started out as a knockoff of U.S. discount site Groupon Inc. One of his earliest successes, Xiaonei.com, was similar to U.S. college social network site Friendster.

But having origins as a copycat isn’t necessarily such a bad thing in a country where many top internet firms trace their origins to knockoff business models. E-commerce titan Alibaba was once likened to a Chinese eBay in its early days, and Tencent started off mimicking AOL’s highly popular ICQ instant messaging system.

The bespectacled, soft-spoken Wang is hoping to follow in the footsteps of such titans on Thursday, when shares of his Meituan-Dianping will make their trading debut in a $4.2 billion Hong Kong listing that could become this year’s biggest internet initial public offering (IPO).

Being labeled a copycat was the least of the worries for Wang, now just 39, during an internet career filled with ups-and-downs. That youthful age helped to place him in this year’s “40 Under 40” list of top young businesspeople compiled by Fortune magazine, joining the ranks of Facebook’s Mark Zuckerberg, Instagram’s Kevin Systrom and Airbnb’s Brian Chesky.

It took 14 years and a couple of hits and misses before Wang would land at the top of his current endeavor that has become China’s largest provider of on-demand services.

Thursday’s IPO will value Meituan at over $50 billion, making it China’s fourth largest internet company, behind only the “big three” of Alibaba, Tencent and Baidu, and ahead of e-commerce giant JD.com. But the road to that achievement wasn’t easy for Wang, who was noted for his zealous pursuit of social networking sites in his early career.

The son of another serial entrepreneur from southeast China’s Fujian province, Wang attended the prestigious Tsinghua University in Beijing, before continuing his studies in the U.S. He launched Xiaonei.com, which means “within the campus,” in 2005, the same year after dropping out from his doctorate in engineering program at the University of Delaware at the age of 26.

The Friendster-like Xiaonei took off rapidly and was a hit among college students. But Wang had been borrowing money from his parents to keep the business afloat. A surge in users meant more investment was needed in servers, and Wang decided to cash out by selling his venture to Oak Pacific Interactive in 2006.

“The day when we announced the sale of Xiaonei.com, the team and I were in a restaurant. We drank beers in total silence with tears pouring down from our faces,” Wang was quoted as saying by the Chinese media, recalling the sadness they felt at having to abandon their pet project.

Oak Pacific was far happier. It later rebranded the site as Renren.com, which would go on to raise hopes it could be akin to China’s Facebook before its own New York IPO in 2011. Since then, however, Renren’s original site has fallen into obscurity, overtaken by more popular services like the Twitter-like Weibo and Tencent’s WeChat instant messaging service.

From his first endeavor, Wang would go on to launch Fanfou.com in 2007, becoming one of China’ first knockoffs of the popular Twitter. But the service was taken offline after riots in the restive, Muslim-majority Xinjiang region of July 2009 and would not return for more than a year. When it came back in November 2010, rivals offering similar knockoff services such as Weibo had already taken the Chinese cyberworld by storm.

Undaunted, Wang and other friends decided to detour from social networking sites by dabbling in e-commerce. He created Meituan.com, a Chinese copycat of U.S. group-buying site Groupon, in March 2010.

From that beginning, Meituan has positioned itself as an online-to-offline services specialist, which typically bring together everyday services like restaurant dining and takeout delivery with high-tech internet touches. His company has gone on to dip its toe into almost every aspect of Chinese urbanites lives — from takeout delivery to ride-hailing, movie-ticket sales, travel bookings and bike sharing.

His company cemented its leadership in the space after its $15 billion merger in 2015 with top rival Dianping, which operated an app similar to U.S. online restaurant review site Yelp Inc.

While Meituan will be the toast of the town at the Hong Kong stock exchange on Thursday, analysts said it has to shore up its finances to compete over the long term in a highly a competitive landscape.

“A business model like Meituan’s could mean it will either make a lot of money, or bleed a lot of cash,” an analyst who recently attended the company’s IPO roadshow in Hong Kong told Caixin.

Meituan lost 18.9 billion yuan in 2017, triple the loss of 5.8 billion yuan in 2016. In the first four months of 2018, the company had an adjusted net loss of 2 billion yuan, reflecting the $2.7 billion acquisition of bike-sharing startup Beijing Mobike Technology Co. Ltd. in April as well as increased sales expenses and rising debt.

Meituan plans to use money from the IPO to fortify itself against stiff competition from its main competitor, food-delivery platform Ele.me which is backed by Alibaba.

Its recently acquired Mobike also faces fierce competition from Ofo, which are both battling for the country’s fledging market for shared bikes.