Caixin Explains: Why Urbanites are Choosing Pickles and Instant Noodles Over Avocados and Starbucks 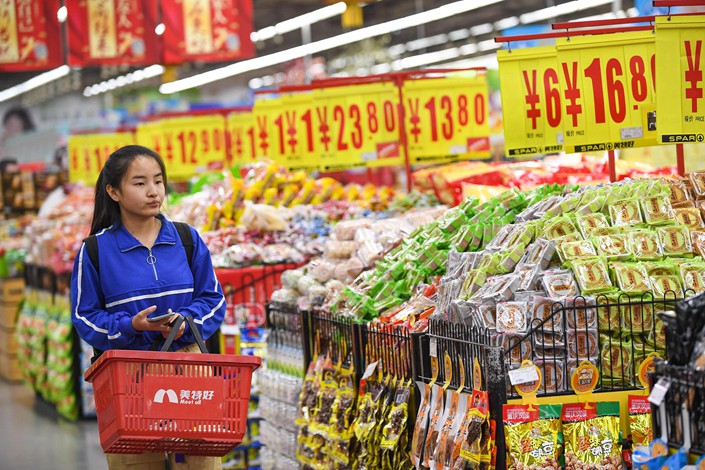 Li Nan now takes the subway instead of hopping into a taxi. Chen Yaojia makes her own coffee at work, and no longer goes to Starbucks. Wang Ting still goes on vacations — but to neighboring Thailand, not the Maldives. Welcome to the “consumption downgrade” (消费降级 xiāofèi jiàngjí), in which China’s burgeoning middle class is drinking beer instead of cocktails, cooking at home instead of dining out, and simply giving up on buying avocados, luxury bags and designer shoes. You may find it hard to sympathize. But the spending habits of up to 400 million people have global significance.

While the “downgrade” has no official definition, it’s generally understood as an increase in the share of total consumer spending going on essentials such as food and rent, with proportionally less spent on high-end products. The idea has resonated with many anxious Chinese families, particularly in Beijing and Shanghai, who say they feel increasingly squeezed between rising property prices and sluggish income growth. Instant noodles, pickles, and “erguotou” — a fiery $2 liquor beloved of blue-collar workers — are symbols of the downgrade. Many of the brands that sell these basic foods and drinks saw their sales rapidly decline from 2014 to 2017 but reported unexpectedly strong sales growth in the first half of 2018.

Government officials and some economists are more optimistic. They say that China, overall, is still seeing a “consumption upgrade” (消费升级xiāofèi shēngjí), with the quality and amount of goods consumed on the increase nationwide. The shift the government wants to see in China’s economy — from relying on investment and exports to drive growth, to consumption — is still on track, they say. This might not square with Wang’s budget vacations, or Chen’s do-it-yourself approach to her caffeine habit. But maybe that doesn’t matter: some analysts say that both an upgrade and a downgrade might be happening at the same time in different parts of the country.