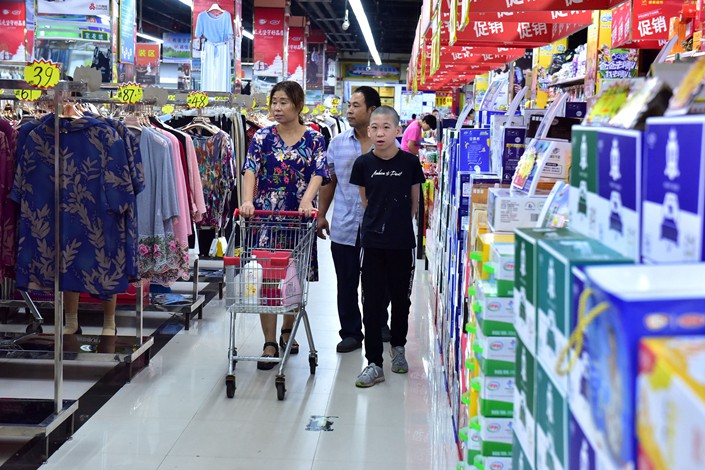 Customers shop at a supermarket in Shijiazhuang, Hebei province, on Aug 9. Photo: VCG

(Beijing) — As rising property prices squeeze consumer spending, a debate has been ongoing about whether China is undergoing a “consumption downgrade.”

But it’s not clear whether this phenomenon is really taking place, according to some analysts.

There’s no clear definition of “consumption downgrade,” but it generally means an increase in the proportion of total consumption spending going to essentials such as food, or a shift from high-quality products to lower-quality ones.

Chinese internet users have discussed the phenomenon extensively on social media over the past few months, and a recent New York Times report discussed this phenomenon, quoting young people living in China’s wealthy cities who said they have cut back on spending.

Last week, brokerage firm UBS Securities released a report showing that only 25% of surveyed consumers in first-tier cities planned in May to purchase medium-priced kitchen ventilators or stoves, defined as those costing between 3,000 yuan ($441) and 5,000 yuan. This was 11 percentage points lower than it was in May 2017.

Meanwhile, people choosing to buy cheaper ventilators or stoves, priced at less than 3,000 yuan, and those preferring more expensive ones priced at 5,000 to 10,000 yuan, each accounted for a larger proportion year-on-year.

That means a “consumption upgrade” and a “consumption downgrade” have emerged at the same time in the four biggest Chinese cities, UBS analyst Christine Peng told a Shanghai news conference. Demand for consumer goods among first-tier cities’ middle-class residents has declined due to intensifying mortgage stress, she said.

In recent weeks, at least three provinces have warned that the increasing cost of owning or paying for a home has left consumers with less money to spend on other goods and services, a phenomenon known as crowding out.

However, Tony Wang, another analyst with UBS, cast doubt on the idea of a consumption downgrade because there has been continuous consumer demand for higher-quality big-ticket home appliances. The so-called consumption downgrade may simply show that consumers care more about the price-to-performance ratio when it comes to midlevel home appliances, which lack upgraded features, he said.

Broadly speaking, growth in retail sales, which includes spending by governments, businesses and households, slowed nationwide to 8.8% year-on-year in July, down from a 9% pace in June and just off an 8.5% increase in May that was the lowest since 2003, according to government data.


The official indicator of retail sales has limitations because it doesn’t include service consumption, while service expenditures, such as those on education, medical care and entertainment, have accounted for a larger and larger proportion of total consumption expenditures, said Huang Zhilong and Fu Yifu, analysts with the Suning Institute of Finance, an affiliate of Chinese retailer Suning Holdings Group Co. Ltd.

A slowdown in retail sales is not equivalent to a “consumption downgrade,” said Li Xunlei, an economist with Zhongtai Securities, in an article published on his WeChat social media account.

Government data showed that spending on food as a proportion of total household consumption expenditure nationwide did not rise in the first half of the year compared with a year earlier, Li said.

“I don’t think there’s a ‘consumption downgrade,’ but we should pay attention to two problems amid the slowdown of consumption growth,” Li said. A high household debt ratio may have an impact on consumption, while the slowdown of the low-income group’s income growth may imply that the jobless rate of migrant workers is on the rise, he said.

The surveyed unemployment rate in urban areas, which includes jobless migrants, inched up to 5.1% in July, up from 4.8% the previous month, government data showed. China’s leadership has called for more efforts to “stabilize employment.”

Read more: Opinion: Plenty of Reasons to Be Pessimistic About Consumption