By Ke Baili and Wu Hongyuran 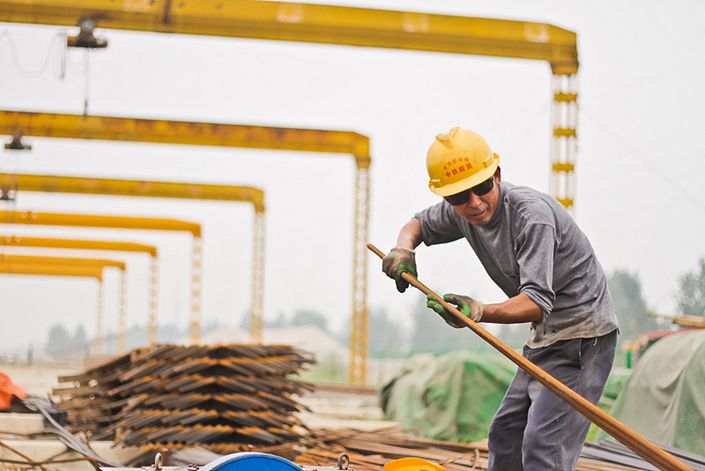 Construction is seen on the Huaixiao railway station in Huaibei, Anhui province, in July 2016. Photo: VCG

* The meeting emphasized continued focus on reducing debt, but indications are that some slight adjustments might be ahead

* The meeting also pledged to maintain a prudent monetary policy and keep liquidity at a reasonable level; however, some analysts believe monetary policy will see significant changes

(Beijing) — When China’s top leadership met Tuesday to discuss economic policy for the rest of the year, the official record didn’t mention the trade war with the U.S.; instead, it referred to “obvious changes in the external environment.” Neither did it mention the swift fall in infrastructure investment growth in the first half of 2018.

But such “new problems and new challenges,” as the report alludes to, do seem to be weighing on the leadership’s minds — and the policy priorities that emerged for the second half of 2018 have been accordingly adjusted slightly, analysts said.

An added emphasis on stability, more calibrated deleveraging, more-active fiscal policy and more-active infrastructure investment are the key changes identified by analysts after examining the record of the Politburo meeting, released by the official Xinhua News Agency.

Working out what Politburo meetings actually mean isn’t easy — the language is carefully couched within the broad and formulaic constructions beloved of China’s government. Analysts look for slight wording changes that could signal big policy changes from the top.

“China’s top policymakers are clearly concerned about two issues: the sharp slowdown of credit growth and the uncertainty due to the trade war,” analysts from Macquarie Capital Ltd. said in a note.

China’s economy grew 6.7% year-on-year in the second quarter, the slowest since the July-to-September quarter of 2016. Factory activity is also showing signs of slowing, with July’s official manufacturing Purchasing Manager’s Index (PMI) coming in at a five-month low. The subindex of new export orders in Caixin’s manufacturing PMI for July shrank at its fastest pace in 25 months.

“The method and pace (of policy) will change, mainly in the service of ‘stability,’ ” CICC analysts said. “These changes are to address new circumstances that emerged in the first half of the year: the external environment threatens growth, and deleveraging has created problems in its implementation.”

Employment was mentioned first among the six, however, with the term “stable employment” mentioned twice in the report as a whole. So long as employment remains healthy, sliding economic growth will not matter too much, said Zhang Ming, a researcher with Chinese Academy of Social Sciences (CASS), talking to Caixin in July.

The deleveraging campaign has been a major focus of the campaign to reduce financial risks, as part of the “three major battles” for this year. However, there have been concerns that with slowing growth and external challenges, the government might ease off on the campaign.

The meeting emphasized continued focus on reducing debt, but it also said policymakers will carefully control the pace and strength of deleveraging measures, indicating that some slight adjustments might be ahead.

“The continued emphasis from authorities on the importance of stability in the economic outlook reinforces our view that the deleveraging campaign will continue, with tweaks at the margin, and the Chinese government is committed to its reform agenda,” said Hannah Anderson, global market strategist at J.P. Morgan Asset Management.

The meeting pledged to maintain a prudent monetary policy and keep liquidity at a reasonable level. Some analysts are more confident that monetary policy will see more significant changes, however. “The briefing also deleted the word “neutral” from the phrase “prudent and neutral monetary policy,” suggesting a clear shift in monetary policy toward easing, according to analysis from Nomura.

“If the unemployment problem becomes severe, a policy U-turn could happen from deleveraging to boosting growth. Clearly we are not there yet,” Macquarie Capital analysts said.

Nomura analysts estimate that infrastructure investment growth could stabilize at single-digit growth in the second half of 2018, but it is unlikely to return to the 15%-to-20% growth seen over previous years.

The Politburo also emphasised price controls on the property market, saying that China will accelerate establishing a “long-term mechanism” for the property sector to ensure the market’s stable and healthy development. No specific new measures were mentioned, however.

“Policymakers are now more concerned about the level of home prices than the growth of home prices. There will be further property market restrictions rolled out in the second half of this year, on a city-by-city basis,” said Ether Yin, a Beijing-based partner at advisory firm Trivium China, replying to Caixin’s questions by email.