‘Art-O-Tainment’: Venues Made For Selfie-Taking Win Over Chinese Millennials 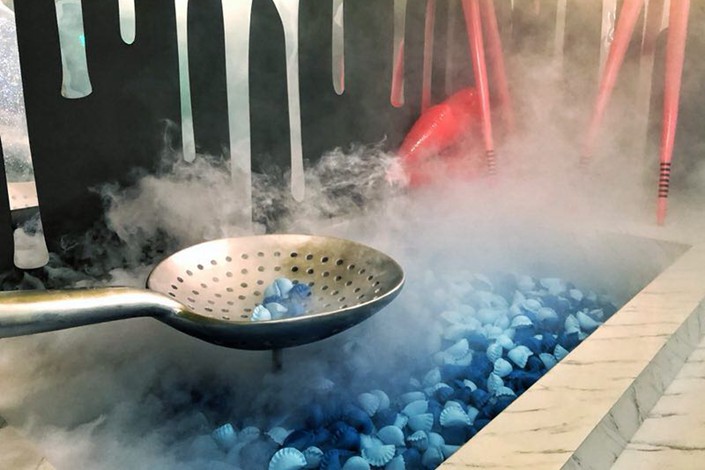 A meter-wide ladle is suspended over a "pool" of dumpling-shaped pillows at Legit Dumpling House. Photo: Noelle Mateer/Caixin

Instead, the “dumplings” at Legit Dumpling House are foot-long plaster statuettes scattered at the base of a 6-foot “bowl,” flanked by human-sized “vinegar bottles.” You can stand in the bowl. You can also hold a shrimp-shaped pillow while leaning against a pink fuzzy wall. Or mount a horse-sized garlic clove and ride it like a wrecking ball, and then cannonball into a pool of dumpling-shaped memory-foam pillows.

Scan a QR code to take a Buzzfeed-style quiz to see which flavor of dumpling matches your personality. Eat that flavor in ice cream form. Stare up at the stoves and pans hanging above you from the ceiling, painted the same rose gold as your iPhone. Employees are on hand to take photos of you through it all.

In short, Legit Dumpling House isn’t a dumpling house at all. Instead, it’s a pop-up “exhibition” that’s merely dumpling-themed. And it offers something many Chinese millennials deem more valuable than snacks: photo ops.

While it may sound unique, Legit Dumpling House is just one of an increasing number of what some call “selfie centers” — fantastical spaces where visitors pay entrance fees to access elaborate backdrops tailor-made for sharing online. And while this trend is prevalent everywhere social media is, China is proving to be particularly fertile ground.

Hardly anyone leaves Legit Dumpling House without taking a photo of themselves, said founder Tim Zhou. And that’s the point.

“Every single space in the exhibition is fully immersive and interactive, and you have to be a part of it to complete the scene,” he said. “It’s like they’re directing their own movie. Of course, they’d want to share the photos.”

And they do. At Shanghai’s The Egg House, visitors follow the narrative of a cartoon egg trying to make it big in the city as they explore photo-ready yolk-yellow rooms, walk through a massive “refrigerator” and, finally, jump into a “caviar pool,” which is filled with orange rubber balls. (Nearly every selfie-friendly exhibit has a colorful pool to jump in.) Most people who visit are in their teens and 20s.

“I think 90% of (visitors) are coming for the photos,” said Ginny Zhang, brand director for The Egg House. “And I think 10% of them are here because they want to have their own pop-up show and are doing research.”

The Egg House chose Shanghai as its second location after launching in New York, where selfie centers all began with the now-infamous Museum of Ice Cream, which features a “chocolate room,” dangling ice-cream cone lanterns and — you guessed it — a pool to jump in, full of sprinkles. Food-news website Eater called it a “wildly popular Instagram installation pop-up that degrades the term ‘museum.’ ”

The Museum of Ice Cream has spawned hundreds of imitators, including ones in China. In China, though, things run a bit differently. In the New York Egg House, staffers interact with visitors, telling the story of a little egg trying to make it in a big city. In Shanghai, this feature was scrapped in order to satisfy local demand for photo ops. “They just want to take photos,” Zhang said.

Zhou also arrived at the same conclusion. He calls the Museum of Ice Cream his “idol.” However, he said, “the best thing about these exhibitions in America is the employees — they have amazing energy. You can’t do that in China.” Instead, employees of Legit Dumpling House mainly hang back, interacting with visitors when the guests inevitably ask to have their photos taken.

But this influx of millennial-friendly creative venues is impacting more than just the malls they tend to open in. According to Lisa Movius, China Bureau Chief of The Art Newspaper, the trend is impacting the greater art world as well. When asked if she’s seen selfie-friendly features in any of China’s high-brow museums: “Oh yes, sections — and entire exhibitions.”

“Museums and artists have realized the value of having selfie-friendly works, or entire exhibitions, for selling tickets and building social media buzz,” Movius said. “Some museums will have photo booths or photo spots outside the ticketed exhibitions, or even within the shows. There is plenty of critical, nuanced art that is also visually very photogenic, and museums try to incorporate such works.”

But that trend isn’t exactly welcomed by established museum, she adds: “There is a real controversy over whether to ban or embrace ‘art-o-tainment,’ and if embracing, how to do so intelligently.”

Zhou is aware of the criticisms that label his business inartistic, but he believes the art world needs to meet potential consumers where they are. Zhou founded Legit Dumpling House after working in a fine-arts-related consultancy, buying art for high-end clients and businesses with fat wallets. He became disillusioned by his clients’ relative disregard for artistic quality, something he attributes to poor art education in China, and decided consumers weren’t ready for high art.

“It will take another two decades, at least,” he said. “And I can’t wait around that long.”

Zhou believes places like Legit Dumpling House can serve as entry points for the art world, for those unfamiliar with it. If in his last job he persuaded wealthy clients to appreciate art, in this one, he’s attempting to train the average young person to make attending exhibitions a regular part of their life.

“The entire cultural industry in China is sick, and not in a positive way. People don’t really accept art the way it is now,” he said. “Exhibitions need to be more interactive, more fun, not so intimidating.”

For now, “selfie centers” are here to stay. Zhou is already working on opening similar exhibitions in shopping centers in cities across China, and will host a Chinese-food-themed pop-up exhibit in Los Angeles later this year. The Egg House is slated to launch a branch in Chengdu in November.

“When I say we’re an ‘art show,’ it’s actually not art,” saying Zhang, reflecting on The Egg House. “I would describe our show as a little fun house, instead. Art is a little serious.”