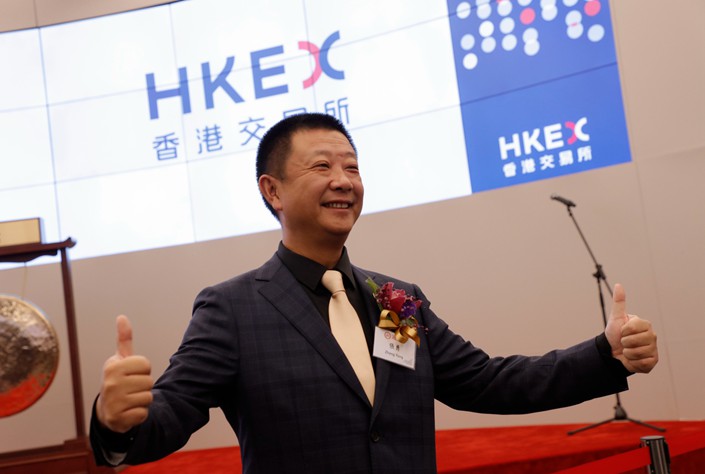 Zhang Yong, founder and chairman of Haidilao International Holding Ltd., poses during the ceremony for the listing of Chinese hot pot chain Haidilao at the Hong Kong Stock Exchange on Wednesday. Photo: IC

Founded in 1994, Haidilao had never raised funds on the public equity market.

At HK$17.82 a share, the hot pot chain finished its first day as a public company with a market cap of HK$94.4 billion, exceeding the valuations of some of its Hong Kong-listed peers, including hot pot chain Xiabuxiabu Catering Management (China) Holdings Co. Ltd.

Haidilao co-founder and Chairman Zhang Yong told Caixin that he chose to list in Hong Kong instead of on the Chinese mainland because listing on the latter looks difficult.

“It isn’t that easy for catering companies to list on the Chinese mainland, where the number of listed ones is very small. I think we are as good as, if not better, than the ones that have already been blocked,” Zhang said.

Only three catering companies are listed on the Chinese mainland, but more than twice that number are on the Hong Kong Stock Exchange. The average price-to-earnings ratio of Hong Kong-listed food companies was 17.2 last year, according to Essence Securities, but Haidilao’s ratio was 68, based on its IPO price.

Operating more than 360 restaurants in China and other markets that include Singapore and Japan, Haidilao will expand further abroad, said Zhang, adding that the best-performing overseas restaurants are in Singapore.