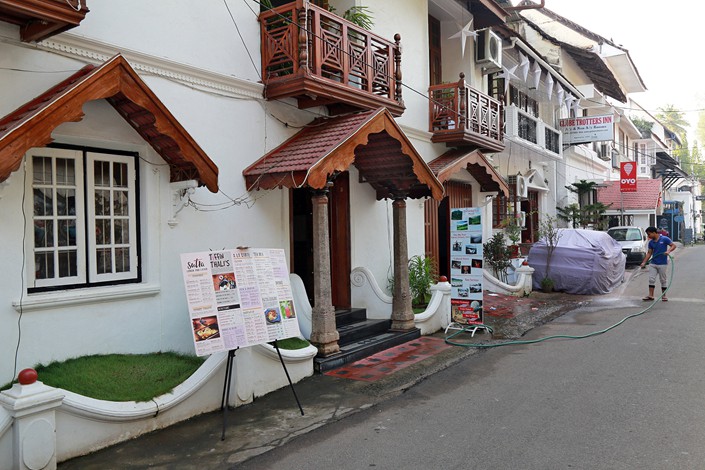 A worker cleans the entrances to some Oyo hotel rooms in Kerala, India on Jan. 3. Photo: VCG

Budget Indian hotel operator Oyo plans to sharply boost its presence in China, armed with $1 billion in new funds from its latest capital-raising, the company said.

The 5-year-old firm is one of the fastest growing of a new generation of low-end hotel operators to recently emerge in India, feeding on demand from a new middle class looking for cheap rooms for both business and leisure travel. China experienced a similar boom starting more than a decade ago, giving rise to such players as current domestic giants like Homeinns and Hanting.

Oyo announced its expansion plans in a Tuesday post on its Twitter account, including word of the massive new funding led by Japan’s SoftBank, with participation from the India units of LightSpeed and Sequoia, as well as Greenoaks Capital.

“This additional capital will help us strengthen our market position in India & China, and boost our international growth,” it said.

Oyo entered China in the southern boomtown of Shenzhen nearly a year ago, and began its local expansion in earnest this April, according to a post (link in Chinese) on its local Chinese social media account. As of the end of August, it had already entered 140 Chinese cities with 1,250 hotels and more than 75,000 rooms.

China was one of the world’s fastest growing hotel markets in the first decade of the 21st century, as the nation’s booming economy created a new class of business and leisure travelers. But that growth has slowed in recent years as the market becomes crowded with local names like Homeinns and international players Marriott International vying for share over a wide array of room prices. Those companies have also had to compete with shared economy homestay specialist Airbnb, as well as homegrown imitators like Tujia.

While China’s hotel market is now home to most major Western brands and some smaller ones from Asian countries like Japan and Singapore, Oyo is one of the first from another developing market.

Its arrival comes as the market’s growth continues to slow, especially at the lower end. China’s budget hotel segment is expected to grow by a modest 5.9% this year to around 90.3 billion yuan ($13.1 billion), according to Euromonitor International. That compares with slightly faster 6.9% growth to 467 billion yuan for the country’s broader hotel market, Euromonitor said.

Despite its rapid growth, Oyo was not among the top 10 brands or hotel operators on Euromonitor’s latest list. The company could face an uphill battle in the crowded China market unless it finds a good partner to help it adapt to local conditions, said Euromonitor analyst Arianna Zhai. She added that by focusing on the budget end of the market, Oyo is bucking a recent trend that has seen traditional budget operators try to develop higher-end offerings to cater to increasingly demanding Chinese travelers.

“Given the size of the Chinese market and strong competition, the lodging market in China is still segmented and leaves space for more potentials,” she said. “In addition to price, customers’ experience is the key to winning the market. With the unique model of Oyo, it could introduce hotel brand and operating solutions for ensuring a controlled and seamless experience, which offers an alternative for domestic and overseas guests.”