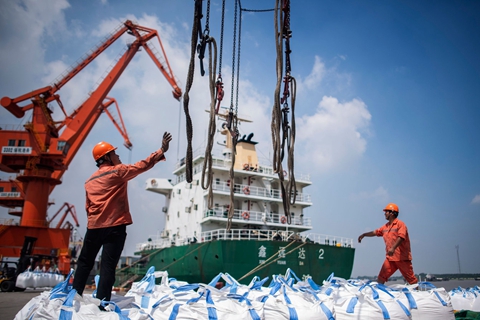 The conclusions challenge U.S. President Donald Trump’s assertions that trade wars are “good, and easy to win.” They also counter the argument that China has more to lose from a spat with its main trading partner because of its greater dependence on exports.

The ECB assumed the U.S. would impose 10% tariffs on all imports, and its trading partners would respond in kind. Under that scenario, China would more than compensate for the loss by selling its products to other markets. The hit to U.S. investment and trade would lower activity there by 2% in the first year after levies start, though the effects would fade over time as the U.S. adjusts its own production.

“Qualitatively the results are unambiguous: an economy imposing a tariff which prompts retaliation by other countries is clearly worse off,” ECB economists Allan Gloe Dizioli and Bjoern van Roye wrote in the report. “Its living standards fall and jobs are lost.”

Protectionist measures taken so far will have only a marginal effect on global economic activity as the affected products represent only a small part of world trade, according to the ECB. The world’s two largest economies have already slapped tariffs on each other’s goods, and the Chinese government called off planned talks with U.S. officials, risking a prolonged conflict that could disrupt global supply chains.

The hit to the U.S. economy seems more manageable at 0.4 percentage point in 2019, according to Oxford Economics. The ECB research suggests the impact will be bigger because it factors in the amplifying affect of a deterioration in business and consumer confidence.

The confidence impact is particularly tricky to estimate, but researchers estimate that neither China nor the U.S. will be spared.

“Global financial-market reactions have a significant and more wide-ranging impact on output across countries, with global output around 0.75% lower in the first year,” Dizioli and van Roye write. “The tightening of financial conditions dampens U.S. GDP by about 0.7%,” and U.S. stocks will decline by 16%, they said.

The eurozone is unlikely to be insulated from the tension. While the research doesn’t quantify the impact on the region, ECB President Mario Draghi has said a slight downward revision to its projections for the bloc’s growth in 2018 and 2019 was due to weaker global trade.