By Fran Wang and Coco Feng 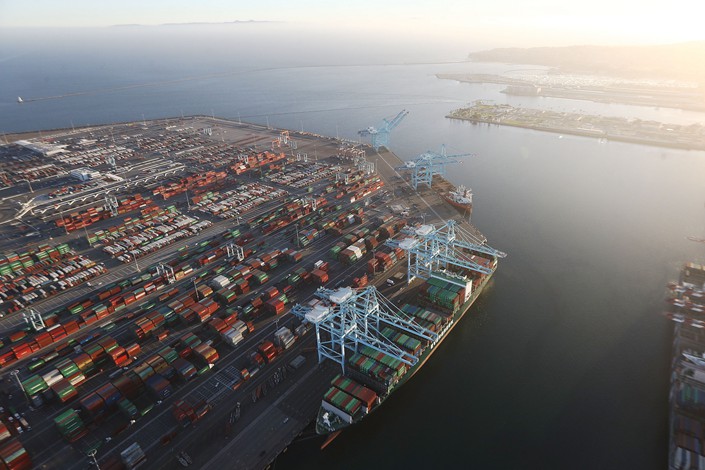 A cargo ship carrying shipping containers is docked at the Port of Los Angeles on Sept. 18. Photo: VCG

Chinese government officials said the door remains open to the U.S. to resolve intensifying trade tensions, but added that the ball is in U.S. President Donald Trump’s court and Beijing will not negotiate under duress.

“The U.S. side has imposed such huge trade restrictions (on China), it’s like having a knife held to one’s throat,” Wang Shouwen, vice minister of commerce and deputy China international trade representative, said at a news conference in Beijing on Tuesday. “How can talks proceed? We wouldn’t be negotiating or having consultations on an equal footing.”

Wang, who led a Chinese delegation to Washington for the last round of talks with officials from the U.S. Treasury Department on Aug. 22-23, blamed the U.S. for a breakdown in negotiations.

“We have already had four rounds of high-level consultations and these did have some effect, you can’t say they were useless,” he said. “The two sides reached some consensus, and even issued a joint statement. But the U.S. side turned its back on the agreement, abandoned the consensus and adopted trade restrictions, making it impossible for negotiations to keep going.”

When and whether talks resume is “completely up to the will of the U.S.,” he said.

Wang spoke at a joint news conference by the Ministry of Commerce; the National Development and Reform Commission (NDRC), the country’s economic planning agency; the Ministry of Industry and Information Technology (MIIT); the Ministry of Finance; and the State Intellectual Property Administration.

The briefing took place a day after the State Council published a 71-page white paper on the trade war. The government attacked Washington’s bullying tactics and intimidation and promoted its own approach to resolving the dispute through consultation and cooperation.

The white paper, “Facts on China-U.S. Economic and Trade Friction and China’s Position,” said that while some economic tension was natural between the world’s biggest economies, the U.S. had abandoned the system of consultation and discussion.

The briefing also took place a day after protective U.S. tariffs on an additional $200 billion worth of Chinese imports took effect, adding to an earlier round of similar taxes on $50 billion worth of goods. China said last week that it would slap retaliatory levies on $60 billion of American products from the same date, bringing up the total amount of imports from the U.S. subject to the taxes to $110 billion.

Trump has warned that if Beijing takes retaliatory measures, his administration will “immediately pursue” imposing tariffs on another $267 billion of Chinese products, which would extend duties to the value of China’s entire annual exports to the U.S.

The Wall Street Journal on Saturday cited unnamed sources as saying that China canceled a round of trade talks proposed by the U.S. Treasury Department. Plans for Vice Premier Liu He to make a follow-up visit to Washington this week were also scrapped, the paper said.

Even so, Fu Ziying, China’s international trade representative and vice minister of commerce, said that as far as China is concerned, the door to solving bilateral trade tensions with the U.S. through negotiations remains open, although he warned that these could not undermine the country’s development.

“Trade negotiations must be based on mutual respect, equality, good faith and consistency in speech and action. The talks must not come at the cost of China’s right to develop,” Fu said at the same briefing.

Analysts widely expect the direct impact of the U.S. tariffs on China’s economic growth to be limited. But there are increasing fears that talks to defuse the trade dispute are deadlocked and that this will hit business confidence in the world’s second-largest economy, leading to more profound, long-term consequences such as accelerated withdrawal of investment from the country.

Economists at investment bank UBS AG estimate that the additional U.S. tariffs on a total of $250 billion worth of Chinese goods will slow China’s growth in gross domestic product (GDP) by 0.5 percentage points in the following 12 months. The drag is expected to rise to 0.8 percentage points in 2019 when the U.S. raises the taxes on $200 billion of Chinese products to 25% from 10%, they said in a report last week. They kept their forecast for China’s GDP growth this year at 6.5%, but revised down the projection for 2019 to 6.0% from 6.2% previously.

Lian Weiliang, a vice chairman of the NDRC, told reporters that the government is “capable of offsetting the impact” of the U.S. tariffs through “expanding domestic demand and promoting high-quality growth,” although he warned that some industries and regions will be affected more acutely than others.

“The risks are generally controllable,” he said, pointing to the resilience of the Chinese economy, its vast domestic market and demand for investment, and the growing competitiveness of exporters as strengths that will help the country weather the trade war.

Luo Wei, a vice minister at the MIIT, noted that some foreign companies may be considering moving to other countries to diversify risks or lower costs. But he downplayed concerns about the outflow, pledging that the government will improve the country’s business environment through measures such as tax cuts, and further broaden foreign investors’ access to the Chinese market.

“Cross-border investment and shifting operations are business decisions made by companies themselves to allocate their resources globally,” he said. “We should look at the issue in a rational way.”