By Fran Wang and Zeng Jia 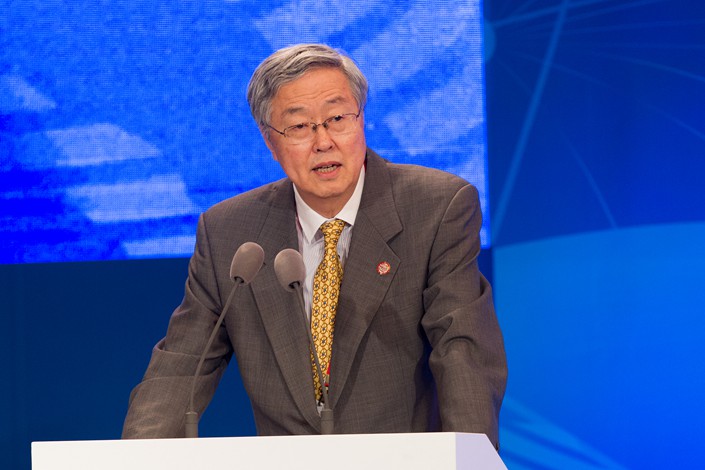 Uncertainty and a loss of confidence among investors are the main risks to China from the trade dispute with the U.S, while the impact of tariffs themselves will be “not very serious” for the Chinese economy, Zhou Xiaochuan, the former governor of the People’s Bank of China (PBOC), said.

“The negative impact of the trade war itself on the economy would not be significant,” Zhou said in an interview with American business-news television network CNBC on Friday in Italy, where he is attending a conference. Mathematical modeling conducted for the government to calculate the impact of the trade war showed it would have “less than half a percent impact” on the Chinese economy, Zhou said.

Bank of America Merrill Lynch estimated in a report published Friday that the tariffs imposed by the U.S. so far and the expected next round of levies on $200 billion of Chinese exports could reduce the country’s economic growth by 0.3 percentage points to 6.1% from 6.4% in 2019. UBS economists have put the potential impact at 0.3 to 0.5 percentage points.

However, the unpredictability of the dispute and its impact on investor confidence in China are much more difficult to analyze, said Zhou, the PBOC’s longest-serving governor who retired in March after 15 years in the job.

“(M)athematical model is not so good to simulate the sentiment, especially the panic. We saw it when the Lehman Brothers event happened,” Zhou said, referring to the collapse of the American investment bank in 2008 which triggered weeks of chaos and fear in financial markets at the onset of the global financial crisis.

“It’s suddenly a kind of panic, the contagion. This kind of thing is not very easy to analyze,” he said.

Investors and consumers dislike risk and uncertainty, which could hurt business and the stock market, he said. Economic woes in Argentina, Turkey and Russia, where local currencies have depreciated rapidly against the dollar in recent months, have also added to an “instable sentiment” among investors, Zhou added.

In response to the trade war, the Chinese government has made only “very moderate policy changes” so far that included slowing the pace of its deleveraging campaign, he said. The policy is aimed at bringing down the ratio of debt to gross domestic product and strengthening fiscal discipline to reduce local government debt.

“We still see the major problem is uncertainty. We are waiting to see for the forthcoming months what is going to happen,” he said.

“I think we have good enough buffer to deal with trade war,” Zhou said. China could also speed up the diversification of its export markets to compensate for losses in sales to the U.S., he added.

Zhou also urged Washington to look at trade with China not just in goods, but also in services, where the U.S. had strong advantages. China’s trade surplus with the U.S. is determined by its comparative advantages such as relatively low labor costs and its army of engineers. The U.S. instead enjoys “much stronger” service sectors, particularly financial services, education and health care.

Although China may import more American-made goods such as aircraft, integrated circuits and soy beans, “it’s not easy to reach bilateral balance,” Zhou said. “So we hope the U.S. side may really see their advantage in service sectors and … international experience. In those kinds of things, we may reach a new balance.”

The U.S. had a goods trade deficit of $375.6 billion with China last year but a $40.2 billion surplus in services trade, according to U.S. government figures. Its exports of services to China were an estimated $57.6 billion in 2017, 339% greater than in 2007, a growth rate that far exceeded the 106.4% increase in goods shipments to the country, which totaled $129.9 billion last year.

Zhou is now vice chairman of the Boao Forum for Asia, a government backed nonprofit organization based on China’s southern island of Hainan and which holds an annual summit that has been dubbed “Asia’s Davos,” a reference to the annual World Economic Forum held in Davos, Switzerland. Sources close to China Investment Corp., the country’s sovereign wealth fund, told Caixin late last month that he will take a seat on the company’s International Advisory Council.