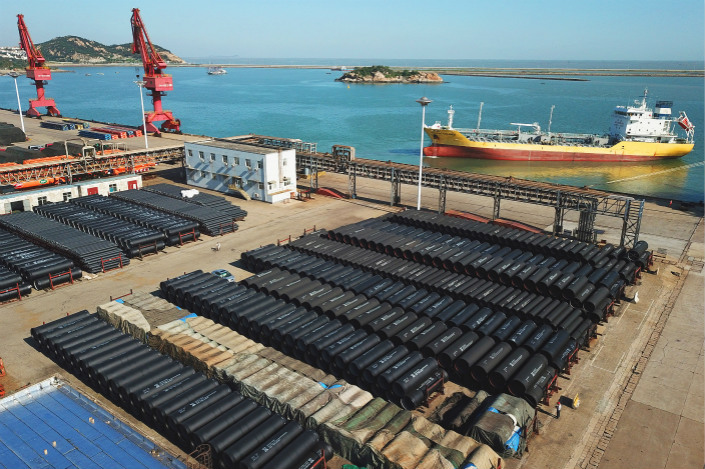 Iron pipes are ready to be shipped out at a port in eastern China’s Lianyungang, Jiangsu province on Saturday. Photo: VCG

China’s exports to the U.S. and its surplus with its largest trade partner continued to grow in August, despite U.S. President Donald Trump’s escalating tariff offensive aimed at reducing the imbalance.

The August trade surplus with the U.S. widened $2.97 billion from July to $31.05 billion, according to Chinese government figures released on Saturday. The surplus was $26.23 billion in August 2017.

Analysts said the rise in exports to the U.S. in August was due in part to a rush by some companies to bring goods into the U.S. before further tariffs were imposed.

Worldwide, China’s trade growth slowed down in August. According to figures of the General Administration of Customs, China’s export growth rate slowed to 9.8% in August from 12.2% in July, while import growth also moderated, to 20.0% from 27.3% a month earlier.

According to the customs data, China imported 6.2 million tons of soybeans in the first eight months of this year, 2.1% less than the same period of last year; imports of automobiles also dropped 2.4% to 780,000 units.

Chinese and American officials held another round of talks in Aug. 22-24 in Washington, D.C. No progress was reported.