By Qing Ying and Bonnie Cao 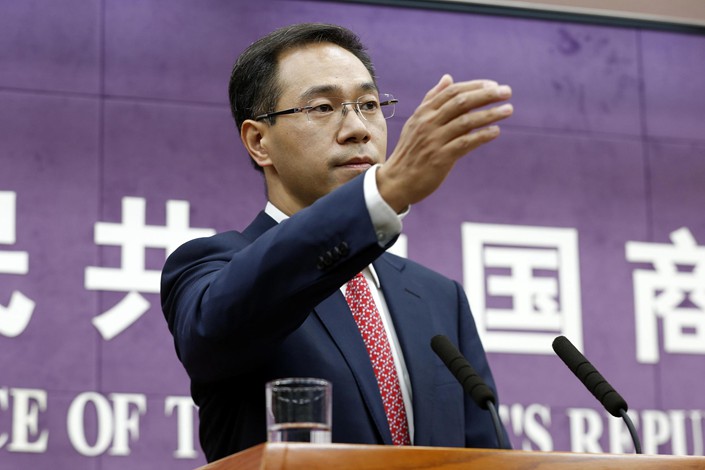 “The U.S.’s so-called hardline stance will not help solve the problems,” said Gao Feng, a spokesman for the ministry, at a regular press conference in Beijing. “Unilateralism and trade protectionism are unpopular and going against the trend.”

The U.S. Commerce Department Monday completed an unprecedented six-day public hearing on plans to impose tariffs of as much as 25% on a wide array of Chinese imports.

More than 90% of U.S. companies at the hearing opposed the tariffs, indicating that President Donald Trump’s trade policies are broadly unpopular, Gao said. No matter how much the administration ratchets up its pressure, China will continue to work with most countries to maintain the multilateral trading system, he said.

Three-quarters of the 350 companies attending the hearing said tariffs would hurt the U.S. economy, according to GRISK, a geopolitical analysis company. Almost two-thirds of them said it is hard to find alternatives to Chinese products that are subject to sanctions, GRISK said.

While the U.S. and Mexico agreed this week on revisions to the 24-year-old North American Free Trade Agreement, little progress has been made on easing trade tensions between China and the U.S., the world’s two largest economies.

China and the U.S. will “keep in touch in the next stage,” Gao said, without elaborating.

The U.S. slapped a new round of tariffs on $16 billion of annual Chinese imports last week, prompting Beijing to retaliate with its own levies on American goods of the same value. Both countries in July imposed tit-for-tat levies on $34 billion of each other’s imports.

Some Chinese exporters have already felt the chill from the trade war, according to Gao. But these companies are working to turn the challenge to opportunities for restructuring, Gao said.

The Chinese government is also taking steps to shield the economy from the impact of the trade war. China’s auto imports surged to a record high in July after the government lowered the tariff from 25% to 15%.