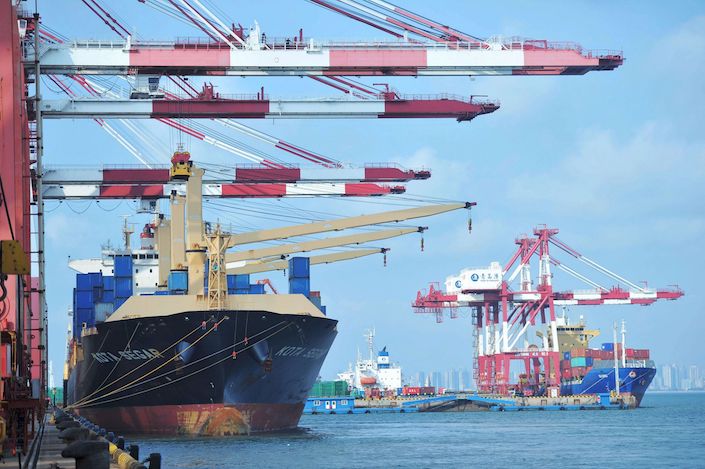 Traders are rushing to load their goods on board as trade war heightens. Photo: VCG

It has become almost impossible to get shipments loaded on trans-Pacific cargo ships as the trade war between China and U.S. escalates, shippers say.

Companies exporting goods to the U.S. are trying to accelerate shipments to beat scheduled and threatened new tariffs. Meanwhile, shipping companies are canceling departures and cutting capacity in anticipation of reduced demand.

As a result, most trans-Pacific cargo ships have been fully loaded, and many smaller producers are having problems finding space to ship their goods. They have to wait days at Chinese ports, shippers complained on FOB, an online shipping forum.

The delays and idling of container capacity are driving up shipping costs. Rates have jumped by $500 per 40-foot equivalent unit (FEU) since July 6, according to data from Shanghai Shipping Exchange. The average loading rate for ships from Shanghai to U.S. ports increased to more than 95% with some ships fully loaded.

China and the U.S. have each imposed 25% tariffs on $34 billion of imports from each other last month, while both are scheduled to add tariffs on an additional $16 billion of goods starting Aug. 23.

Container shipping lines are cutting back on trans-Pacific services amid uncertainty over the impact of the Sino-U.S. trade war. Two alliances formed by various shipping companies, the Ocean Alliance and THE Alliance, plan to cut capacity on routes from central China and North China to the U.S. West Coast in August, according to Alphaliner, a shipping data analytics firm.

They follow the 2M alliance of Maersk Line and Mediterranean Shipping Co., which in June reduced trans-Pacific ship departures. The cutbacks equate to 6.7% of capacity deployed on the routes, or 21,300 20-foot equivalent units (TEU) per week, according to Alphaliner.

Further fallout on the trans-Pacific container trade may loom in September. Weekly shipping capacity from the Far East to North America may drop to 450,000 TEU from the peak of 460,000 TEU in July, according to Alphaliner.

The Chinese shipping giant Orient Overseas Container Line Ltd. (OOCL) said Wednesday that the impact of the trade war will be limited, affecting 2% to 3% of its cargo volume. OOCL’s transpacific shipping increased 5.9% in the first half this year from a year ago, the company said at an earnings press conference in Hong Kong.

A decline in the value of Chinese currency against the dollar also helped support trade with the U.S., according to OOCL. China’s exports to the U.S. in July rose 5.6% from a month earlier while imports increased 4.3%, customs administration data showed Wednesday.