By Luo Guoping and Bonnie Cao 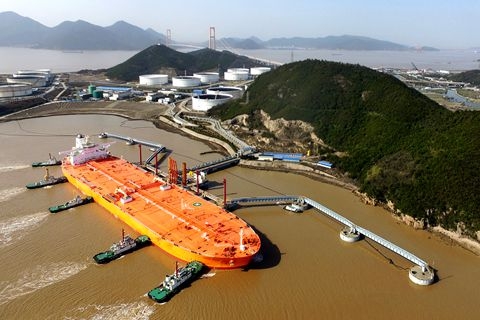 Traders have scaled back crude oil imports from the U.S. because of concerns over possible tariffs. Photo: VCG

China's crude oil imports from the U.S. fell sharply in July and may drop further in August amid the trade war between Washington and Beijing.

China imported 6.9 million barrels of U.S. crude in July (223,000 barrels a day), more than half the record high of 14.65 million barrels in June, according to S&P Global Platts. Deliveries in August may shrink even more, to around 6 million barrels, Platts estimated.

China and the U.S. each imposed 25% tariffs on $34 billion of imports from each other last month, and both are scheduled to add tariffs on an additional $16 billion of goods starting Aug. 23. China’s Commerce Ministry this week removed U.S. crude from a previous list of additional tariffs.

Chinese buyers have been cautious since June to avoid the threat of higher tariffs, said an energy analyst at Cinda Securities Ltd. Shipping of crude oil from the U.S. to China usually takes about three weeks.

Crude oil is playing an increasingly important role in trade between the U.S. and China. U.S. energy policy has shifted toward increasing exports, especially the production and export of fossil energy products since President Donald Trump took office in 2017.

More U.S. crude oil went to China in 2017 than to any other destination except Canada, according to a July 10 U.S. Energy Information Administration article. Based on EIA data through April, China’s imports of U.S. crude oil have continued to increase, averaging 330,000 barrels a day in 2018.

While the U.S. is not a major crude supplier to China, it shipped 3.9 million tons of oil to China in the first quarter, an eight-fold increase from the same period a year ago. Cheaper U.S. prices helped boost imports, said Zhong Jian, an oil industry researcher at the data service firm JLC Ltd.

The outlook for China’s crude imports from the U.S. will largely depend on trade policies between the two countries, Zhong said.

Some oil tankers laden with U.S. crude that were initially headed to China in July appeared to be diverted to India or other markets before being shipped on to China. More Chinese buyers may follow suit to skirt any tariffs. India’s imports of U.S. crude more than doubled to about 200,000 barrel a day in July from a month ago, according to data from Cinda Securities.