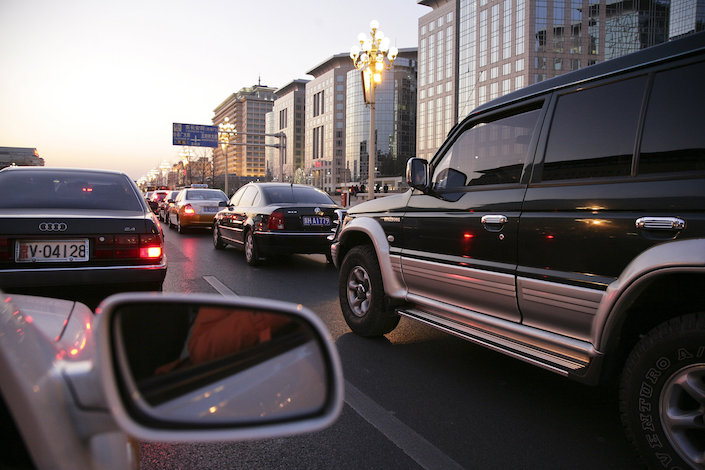 Cars in a traffic jam at dusk, in Beijing's Chaoyang District. Photo: VGC

China imported four times as many cars in July than in June as importers took advantage of a tariff cut that took effect last month.

China imported a record 165,000 foreign vehicles in July, up from 45,000 the previous month, according to data (link in Chinese) that the General Administration of Customs released on Wednesday.

The uptick is largely due to a 10-percentage-point tariff cut on most imported vehicles. In late May, China announced that it will reduce duties on 135 types of imported vehicles from 25% to 15% starting in July.

The announcement prompted many car buyers to delay purchases until after the inevitable cut to sticker prices. In June, the number of cars imported into China fell 60% year-on-year, according to the General Administration of Customs.

Despite the surge in July, it is unlikely that car imports can maintain their momentum as the escalating trade war between China, and the U.S. has led Beijing to do a partial U-turn on the tariff cuts.

Last month, China announced that the levies on some cars imported from the U.S. will rise from 15% to 40% starting July 6 — part of the retaliatory measures against new tariffs from Washington on $34 billion of Chinese goods.

Starting Aug. 23, almost all cars shipped in from the U.S. will be subject to a 40% levy as part of the $16 billion in new tariffs that Beijing announced earlier this month, a source close to policymakers told Caixin. The announcement came in response to the new round of tariffs that the Trump administration unveiled the same day on an equivalent amount of imports from China.

The General Administration of Customs didn’t break down July’s imported car figures by country of origin. However, in 2017, China imported about 280,000 vehicles from the U.S., accounting for nearly one-third of the total imported cars.

Some foreign automakers with car production facilities in the U.S. have already jacked up prices in response to China’s tariff increase. For example, BMW announced in late July that it will raise the prices in China of two of its U.S.-made SUV models — the X5 and X6 — by 4% to 7%.