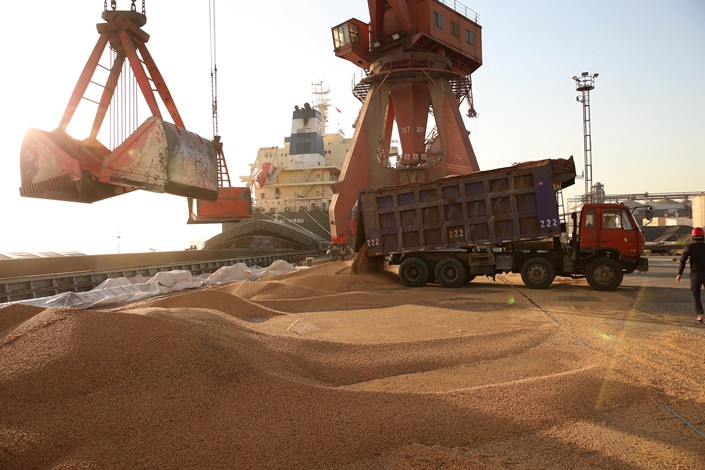 *New U.S. tariffs on Chinese goods in sectors including aerospace, information technology and automobiles were immediately met by retaliatory levies

*While the impact on the world’s largest two economies will be modest, targeted industries could be seriously disrupted due to the highly specialized nature of global supply chains, analysts said

(Beijing) — The threat of a trade war has become a reality.

China’s Ministry of Commerce on Friday accused the U.S. of “launching the biggest trade war in economic history” in a statement (link in Chinese).

“China promised that it would not fire first, but it has been forced to take necessary measures to defend the core interests of the country and its people,” the statement said.

The U.S. Trade Representative (USTR) Office had said that an additional tariff of 25% on about $34 billion worth of Chinese imports would take effect at 12:01 a.m. Friday U.S. Eastern Time (12:01 p.m. China time) as scheduled.

The taxes target 818 kinds of Chinese products in industries such as aerospace, information and communications technology, robotics, industrial machinery, new materials and automobiles, according to a USTR list released previously.

Following the announcement of new U.S. tariffs in mid-June, China’s Commerce Ministry said that the government would impose an additional 25% tariff on 545 kinds of American products of the same value, including soybeans, automobiles and seafood.

The U.S. is considering an additional 25% duty on another $16 billion of Chinese goods, and China has said it will follow with similar measures if the U.S. goes ahead with the second batch of tariffs, according to previous statements from the two sides.

The direct impact of the imposed tariffs on the two countries’ economic growth will be modest because the value of goods involved accounts for only a sliver of bilateral trade, but the impact on targeted industries will be significant, some analysts said.

Analysts and businesses have expressed concerns about the impact on the U.S. The burden on U.S. consumers could be significantly higher if more taxes are imposed on cars and daily necessities imported from China, said Tai Hui, JP Morgan Asset Management’s chief market strategist, in a note. This could translate into weaker growth, higher inflation or even stagflation, he said.

Recent and proposed trade actions by the Trump administration, including those targeting Chinese imports, threaten as many as 2.6 million American jobs and will stymie the domestic economic recovery, said the U.S. Chamber of Commerce, the country’s largest business group, which represents 3 million businesses.

“Millions of American jobs depend on America’s ability to trade with other countries,” the chamber said in a recent statement. “Half of all U.S. manufacturing jobs depend on exports, (and) one in three acres on American farms is planted for international sales.”

Global supply chains are now highly specialized and delicate, and disruption in one part of the production could imply a breakdown in the whole process, Hui said.

Of the $34 billion of Chinese goods targeted by the U.S., around 59%, or $20 billion, is produced by foreign-owned companies, including some from the U.S., Chinese Commerce Ministry spokesman Gao Feng said Thursday. The implementation of new U.S. duties on these products will impact companies from outside China, including the U.S.

“There are no winners in a trade war,” said William Zarit, chairman of the American Chamber of Commerce in China. “We urge the two governments to come back to the negotiation table with the aim of having productive discussions based on achieving results — focused on fairness and reciprocal treatment — instead of escalating the current situation.”

Ongoing trade tensions have weighed on the Chinese stock market, and led to a weakening of the yuan against the greenback.

The benchmark Shanghai Composite Index fell by as much as 1.52% in the morning before finishing the session up 0.45% on Friday. The yuan, which has weakened sharply against a broadly strong U.S. dollar in recent weeks, was trading at 6.6480 per dollar as of 4:30 p.m. China time, 0.16% weaker than the previous day’s closing price.

Reporters Leng Cheng and Jiang Mengjie contributed to this report.