China Says It Won’t Shoot First, but Will Return Fire in Trade War 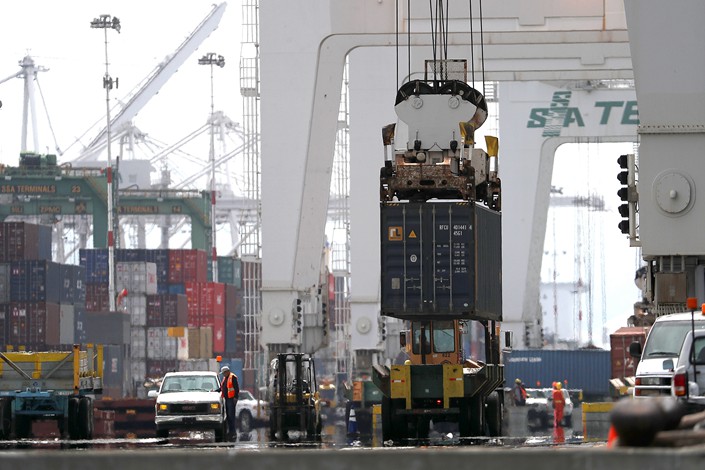 A Chinese container ship is unloaded at a U.S. port on June 20. Photo: VCG

* China said it will only respond to U.S. moves on trade, one day before Washington plans to impose a 25% on $34 billion of Chinese exports, 59% of which is produced by foreign-owned companies

* Analysts said that the threatened tariffs would have a limited impact on growth and corporate earnings, but would send shock waves through many countries and sectors

China will not shoot first in a looming trade war with the U.S., but it will fire back, the Ministry of Commerce said Thursday.

The statement came one day before Washington plans to impose a 25% tariff on $34 billion of Chinese exports to the U.S., which some worry will ignite a full-blown trade war between the world’s two largest economies.

Of the $34 billion of Chinese goods targeted by the U.S., around 59%, or $20 billion, is produced by foreign-owned companies, including some from the U.S., Commerce Ministry spokesman Gao Feng said at a news briefing (link in Chinese) on Thursday. If the U.S. levies additional tariffs on these products, it will impact companies from outside China, including the U.S.

Previously, China denied (link in Chinese) media reports that Beijing would levy additional tariffs on American goods ahead of the U.S. on Friday due to the time-zone difference. China is 12 hours ahead of the U.S.’ Eastern Daylight Time.

In April, the U.S. released a proposed list of Chinese products that might be subject to punitive tariffs. The release of the list followed a seven-month investigation into unfair trade practices related to China’s alleged forced transfer of U.S. technology and intellectual property. The list triggered escalating exchanges of tariff threats between the two countries.

Senior officials from both sides met for at least three rounds of trade talks in May and early June. But in mid-June, the U.S. announced a plan to begin collecting an additional 25% duty on about $34 billion of Chinese imports on July 6 and on another $16 billion at a later date. China then announced its own planned measures in response to the U.S. threats.

Concerns over a trade war, along with a nationwide deleveraging campaign and a strong U.S. dollar, have led to turbulence in the Chinese stock market and a weakening of the yuan against the greenback.

There has been no sign that the two countries will pull back from their tit-for-tat tariff threats. Given that the threatened tariffs would affect goods accounting for a sliver of Sino-U.S. trade by value, the impact on economic growth and corporate earnings will be minimal, Hussein Sayed, chief market strategist with foreign-exchange broker ForexTime, said Thursday in a research note.

However, the tariffs will have a negative impact that goes beyond the targeted goods, according to Madhavi Bokil and Lillian Li, vice presidents of Moody’s Investors Service.

Given the global integration of manufacturing supply chains and international links between financial markets, the credit effect of the U.S. and Chinese actions will reverberate across companies and sectors in many countries, they said in a note.

The Trump administration has also threatened to impose tariffs on another $200 billion of Chinese exports to the U.S., to which China has said it will respond in equal measure.

If those tariffs go into effect, it will lead to a meltdown in global equities, emerging-market currencies and debt, Sayed said.