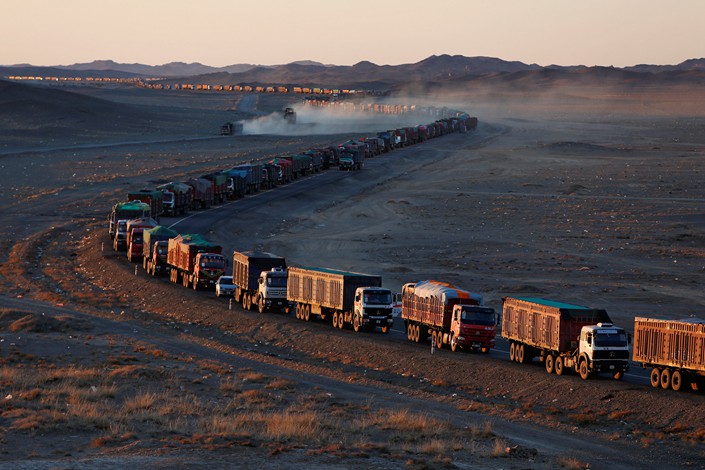 Thousands of heavy-duty trucks loaded with coal line up for around 130 kilometers (80 miles) on the sole road through the Gobi desert on the Mongolian side of the Mongolia-China border, Oct. 29, 2017. Photo: VCG

China is scaling back an ambitious proposal to ban the shipment of coal, ores and other bulk commodities by truck, following pushback from industry players worried about logistical issues and higher costs.

The changes were revealed in a plan released this week by the State Council, China’s cabinet, marking a large scale-back following a public-comment period for the previous plan first announced in May. The plan is part of Beijing’s broader program to clean up the nation’s polluted air, the product of China’s rapid industrialization, since diesel-powered trucks used to transport such commodities are considered a major pollutant compared with rail and water transport.

The biggest change in the latest draft of the three-year plan saw the dropping of wording that would have banned all truck transport for coal, iron ore, coking coal and other similar bulk commodities to and from many ports by the end of next year. Instead, such materials “in principle should be transported primarily by rail and waterways,” according to the version released on Tuesday.

The original version of the rule had said that all truck-based transport of minerals, steel, coking coal and other bulk commodities would be banned by the end of next year in the North China area around Beijing and Hebei province, and at Yangtze Delta sea and river ports centered around Shanghai and coastal Jiangsu and Zhejiang provinces.

In another major change, the latest draft pushes back the rollout of the new program to the start of the winter heating season of 2020, which typically begins around November, from previous plans to start at the end of 2019. Another change saw the addition of water transport to the plan, which had initially focused only on rail transport to replace trucks. Rail transport is generally about 60% to 80% more expensive than trucks, which had led to concerns about rising costs from producers and users of coal, iron ore and other bulk commodities, observers said.

China’s rail operator is trying to beef up its capacity in anticipation of the growth in demand. It aims to boost its annual freight volume to nearly 5 billion metric tons (5.51 billion U.S. tons) by 2020, an increase of 35% from last year, according to a plan viewed by Caixin this week. A major part of that plan would see the state-owned China Railway Corp. ship up to 2.8 billion metric tons of coal, or 75% of the country’s total shipments of the fossil fuel, annually by 2020.

Environmental authorities have long maintained that transporting freight by road is a major contributor to air pollution in China. Emissions from road transport are more than 10 times greater than those from the railway network, according to a March report by Liu Bingjiang, a ministry official who oversees air pollution.

Local governments in Tianjin, Hebei and parts of Shandong province started to ban trucks from transporting coal last year and some progress has been achieved.