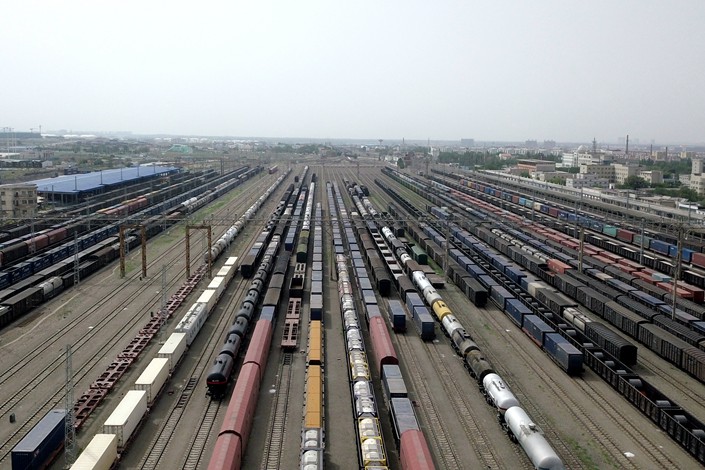 A railway freight yard in the western city of Urumqi on May 30. Photo: VCG

The amount of coal transported is estimated to reach 2.8 billion metric tons, or 75% of the country’s total shipments of the fossil fuel, by 2020, the state-owned China Railway Corp. (CRC) said in a plan viewed by Caixin on Tuesday.

To hit this target, the plan said CRC will ramp up purchases of trains, especially those with greater power capacities, and build more lines specifically for cargo.

The turnaround was mainly due to a ban on transporting coal, ores and steel by road implemented in some northern Chinese regions such as Hebei province.

As this ban continues, and as Beijing prepares to expand the ban to more regions — including the Yangtze River Delta area that includes the wealthy Zhejiang and Jiangsu provinces — CRC’s monopoly status means that its freight business will continue to grow robustly.

For example, 93% of the 325 million metric tons of iron ore that arrived at the northern ports of Tangshan and Tianjin was then transported inland by road, according to a government document viewed by Caixin.

CRC’s plan emphasizes that these “bulk commodities” will be the key category for its freight business, marking a break from its previous strategy of focusing more on expanding its role in the transport of consumer products, such as home appliances and clothing. Even after years under this strategy, consumer products made up less that 1% of CRC’s cargo business by volume.

An earlier version of this story misstated the hoped-for percentage increase in annual freight volume from 2017 to 2020.