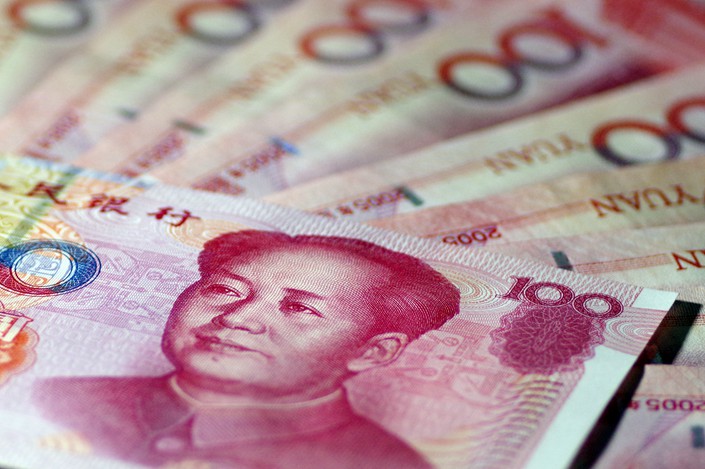 Many newly introduced government policies on deleveraging are similar to what was recommended in a report by two think tanks in June. Photo: IC

* Many of the newly introduced policies are similar to what was recommended in the report by the think tanks, which was kept under wraps until this week

(Beijing) — Editor’s note: China’s economy has been hit by a double whammy of an escalating trade war with the United States and a domestic credit squeeze due to a government-led campaign to rein in off-balance-sheet banking activities in the financial sector.

The country’s economic expansion weakened in the April-June period for the first time in three quarters while the Chinese currency, the yuan, has depreciated significantly against the dollar since mid-June. The situation has emboldened financial institutions and other stakeholders affected by the deleveraging drive to increasingly voice calls for policy relaxation. It even triggered a rare debate between government officials over whether the battle against “shadow banking” needs to be slowed and whether more fiscal stimuli should be introduced to boost growth.

On June 26, the China Wealth Management 50 Forum (CWM 50) and the National Institute of Financial Research (NIFR) of Tsinghua University completed a report listing concerns of financial institutions about the deleveraging campaign and providing policy advice for the government to address rising economic and financial risks. The CWM 50 is a think tank that counts a former central bank governor, an ex-vice minister of finance and a member of Monetary Policy Committee of the People’s Bank of China (PBOC) as its top advisers, as well as senior executives of financial institutions as its members. The NIFR is backed by the PBOC and the country’s financial regulators.

The Chinese government has since July fine-tuned its monetary and fiscal policies and slowed down the debt-reduction campaign to strike a balance between deleveraging and protecting economic growth.

Many of the newly introduced policies are similar to what was recommended in the report by CWM50 and NIFR, which was kept under wraps until this week (link in Chinese), underlining the powerful lobbying muscle of the financial industry.

The following is an excerpt of the report:

We are putting forward the following proposals to tackle the current external and domestic economic and financial challenges and the (potential) evolving and spreading of financial risks:

1.(The government ought to) assert the right direction of deleveraging and restructuring while clarifying as soon as possible the overall target and priorities of the deleveraging of the economy at the current stage.

Various indicators have shown that the deleveraging of the economy since 2016 has had some achievements. We are now entering a new stage of structural deleveraging, or stabilizing the leverage ratio (of the economy). Quantitative and qualitative targets of deleveraging in this stage need to be calculated and defined. Meanwhile, whether the leverage ratios at the government, household and corporate sectors should be further lowered simultaneously or whether the cut should focus on some sectors instead must be clarified. Only after clear policy guidance is put in place can uncertainties and panic in the financial market be dissipated and risks be contained.

2.Step up regulation coordination and prevent regulation from getting overly tight and causing risks to spread across different departments in the economy and grow into major dangers at the macro level

a)Prepare a contingency plan to deal with financial risks. The current foreign and domestic economic and financial environment is extremely complicated. It is very likely that financial risks may emerge persistently, putting rather large pressure on the markets. We suggest the contingency mechanism at the State Council Financial Stability and Development Commission be launched to coordinate relevant ministries to respond to financial risks in a timely and concerted manner. …

b)Deal with problems such as debt defaults and bankruptcies in a timely manner. Relevant authorities should improve the efficiency of the handling of short-term credit defaults by companies and appropriately cope with the aftermath of the incidents to stop the spillover of the risks. For more long-term problems, they should manage the debt reduction work in an orderly manner.

c)Come up with a plan to reduce the dollar’s influence on China’s money supply mechanism to minimize the impact of potential external turbulence. The financial sector may bear the brunt if the China-U.S. trade dispute escalates. An independent domestic money supply mechanism should be prepared to prevent liquidity in the domestic market from contracting sharply due to drastic fluctuation in the exchange rate and significant capital flows across countries.

a)Monetary policy. The core of monetary policy is to cope with the impact on domestic liquidity from external turbulence as well as the problems in the transition period of the domestic financial reform. Our suggestions are as follows:

Maintain M2 and total social financing at a stable level after their previous falls … The entire financial industry is experiencing its biggest contraction in two decades. The new asset management rules and the credit crunch have further complicated the situation. The creation of domestic money supply through the central bank’s purchases of foreign exchanges has become ineffective (as foreign exchange reserves have declined from their peak reached in 2014), which requires us to continue to moderately lower the reserve requirement ratio in a timely manner to provide financial institutions with stable funding and lower the social financing costs. M2 and total social financing should be maintained within a reasonable range after their previous falls. They should neither be overly high nor overly low. …

b)Financial regulation. Financial regulation should pay attention to the stable operation (of the financial sector) during the transition period for the implementation of the new asset management rules. Our suggestions are as follows:

Regulators of different sectors need to publish details for the implementation of the new asset management rules as soon as possible. While drafting and enforcing the detailed rules, they should make proper arrangement for the transition period, taking into consideration the risks that have already emerged. … Financial institutions should be allowed to invest a certain proportion of their funds in nonstandard credit assets to ensure the basic financing needs of the real economy are met. … They should also be given a grace period to comply with requirements on capital employed and loan sizes while they move their off-balance-sheet assets back onto their books. …

c)Fiscal policy. Apart from monetary policy and financial regulation, fiscal policy also needs to make complementary arrangements as soon as possible. While regulating the borrowing of local governments by shutting the channels through which they build up debt off their balance sheet, doors should be opened for them to get financing in a proper way. As the three-year debt-to-bond swaps approaches its end, details of the plan for the normal issuance of local government bonds should be clarified as soon as possible, such as how to determine the size of the sales, policies regarding investors, and trading rules. … The central government should take measures to compensate for the drops in investment due to the deleveraging of local governments. Against the backdrop of the massive tax cut in the U.S., China’s expansionary fiscal policy should be implemented via tax reductions to mitigate risks of capital outflow and prevent major dangers while the economic growth is decelerating.