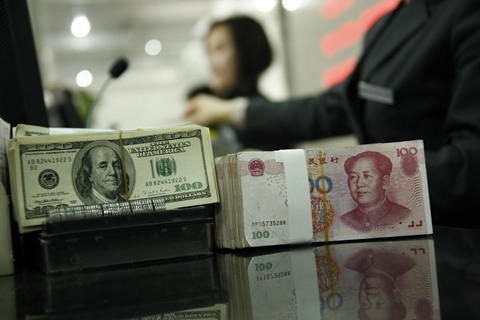 China’s central bank said it has revived its use of a “countercyclical factor” in calculating the yuan’s daily midpoint, with the aim of propping up the value of the currency and stabilize financial market sentiment.

The offshore yuan surged more than 300 pips to trade at around 6.87 against the U.S. dollar in late night trading after the People’s Bank of China (PBOC) made the announcement on Friday.

The countercyclical factor, first introduced in May 2017, essentially gives the government more control over the currency’s daily parity, the midpoint for the allowable daily volatility in the exchange rate. Under China’s managed exchange rate system, the yuan can trade up to 2% above or below the daily parity each day.

The factor was basically removed in March after stabilization of the yuan’s exchange rate and the easing of concerns about capital outflows at that time. However, after the yuan depreciated sharply in the past few months due to a gloomy economic outlook and the escalating trade frictions between China and the U.S., the central bank has taken several steps to support the currency.

The yuan has lost almost 8% of its value against the U.S. dollar since mid-March, when U.S. President Donald Trump officially announced that the U.S. would impose punitive tariffs on imports of Chinese goods.

“Affected by the recent strong dollar index and trade frictions, there have been some pro-cyclical activities in the foreign exchange market,” the PBOC said in the statement (link in Chinese), adding that it had begun “actively adjusting the countercyclical factor” since the start of this month to offset the pro-cyclical market sentiment that has weakened the yuan.

“The revival of the ‘countercyclical factor’ will help the yuan to remain basically stable at a reasonable and balanced level,” the PBOC added.

A senior foreign exchange market participant told Caixin that reintroducing the measure will give the PBOC more leeway in controlling the exchange rate of the yuan, while curbing market speculation about whether it would prevent the yuan from falling below the psychologically important rate of 7 to the U.S. dollar.

The yuan strengthened slightly after China and U.S. confirmed last week that they would hold trade negotiations. But when those negotiations ended on Thursday without concrete progress, the currency began to weaken again.

“The yuan has shown a gradual appreciation against the U.S. dollar recently. Now the big move (to reintroduce the countercyclical factor) comes out, and it’s unlikely that the upward correction will stop at this point,” a foreign exchange trader at a joint-stock bank told Caixin. “We’ll see yuan shorts start cutting losses next week and becoming more cautious in their bets,” the trader said, in reference to bets that the yuan would weaken further.

The central bank has unveiled a number of measures over the past few weeks to defend the yuan, in line with what government indicated earlier this month that its fiscal and monetary policies have taken a more pro-growth stance to keep the economy stable.

In early August, the PBOC reinstated a reserve requirement ratio of 20% for financial institutions settling foreign exchange forward dollar sales to clients, effectively raising the cost for investors betting against the yuan.

It also banned banks from depositing or lending yuan offshore through interbank accounts that are only available in the free trade zone in Shanghai, to choke off the supply of yuan to the offshore market channeled through the zone.

Although the short-term outlook for the yuan was improved, analysts said that they will have to wait and see whether the reboot of the countercyclical factor will be sufficient to support the currency in a longer run, given that current economic conditions, mainly uncertainties surrounding the trade war with the U.S., are very different from when it was first introduced in 2017.