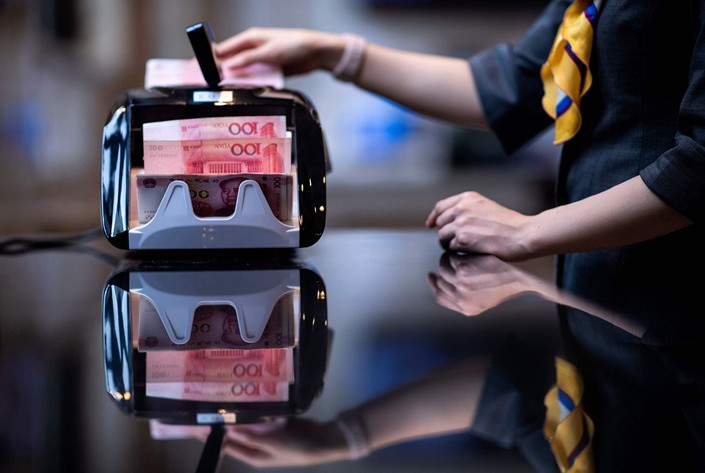 The Shanghai headquarters of the central bank has banned banks from depositing or lending yuan offshore through interbank accounts by suspending some arrangements that were only available in the city’s free trade zone. Photo: VCG

* A bank executive predicted the central bank will continue to support the yuan due to concerns that markets may panic if the currency weakens beyond 7.0 to the U.S. dollar

(Beijing) — China’s central bank has stepped up measures to stop speculators from betting on yuan depreciation and putting downward pressure on the currency by curbing some lending activities that take advantage of special treatment in the Shanghai free trade zone (FTZ).

The yuan has dropped for 10 straight weeks against the U.S. dollar and as it weakened toward a key psychological level this week, the People’s Bank of China (PBOC) moved to choke off the supply of yuan to the offshore market channeled through the pilot zone, where controls on currency movements are much more relaxed than anywhere else in the country.

The Shanghai headquarters of the PBOC issued a notice on Thursday banning banks from depositing or lending yuan offshore through interbank accounts by suspending some arrangements that are only available in the FTZ, a source close to the central bank and an executive with a domestic bank told Caixin.

The action will block the supply of Chinese currency by domestic banks to the overseas market via interbank accounts in the FTZ, tightening offshore yuan liquidity and raising the cost and difficulty of speculating on the currency in Hong Kong, where most offshore activity takes place.

The bank executive said he expects the measure will give a significant boost to market sentiment, and predicted the central bank will likely continue to take measures to support the yuan because it is concerned that markets may panic if the currency weakens beyond 7.0 to the dollar, a level not seen since the global financial crisis in 2008.

“Market sentiment may not turn around until key indicators of the Chinese economy improve or China and the U.S. carry out negotiations to resolve the trade war,” the executive said. “Before those things happen, it will be necessary for the central bank to manage market expectations and conduct counter-cyclical adjustments through macro prudential measures.”

The PBOC’s move came after a July 31 meeting of the Politburo, a key decision-making body comprising the Communist Party’s 25 most-senior officials, listed stabilizing the financial system, foreign investment and market expectations among its priorities for the second half of the year. The policy fine-tuning is aimed at supporting economic growth amid rising external headwinds, due to escalating trade friction with the U.S., and cooling domestic investment and consumption.

The ban “was introduced mainly to maintain stability,” another source close to the PBOC told Caixin, without elaborating.

In an effort to reassure institutions and enterprises transferring yuan on and offshore for business activities, the notice required banks to ensure that “real demand for cross-border payments for the real economy” is not affected as they implement the ban.

The Chinese currency has fallen against the dollar for 10 straight weeks and is approaching the psychologically important barrier of 7.0 to the greenback. The Chinese currency has depreciated by over 7% against the dollar since mid-June, and on Wednesday it hit the weakest rate since January 2017 both in the offshore and onshore spot markets, according to data compiled by Bloomberg.

But the yuan has recovered over the last two days as the PBOC’s action boosted confidence that the currency would not be allowed to slide past 7 to the dollar and also on hopes that trade tensions are easing after China announced a delegation was heading to Washington for talks with U.S. officials.

The yuan was trading at 6.8815 against the greenback in the onshore spot market at the official market close of 4:30 p.m. Beijing time on Friday, up from 6.8960 on Thursday’s close and the second consecutive daily gain, according to chinamoney.com.cn, an official website that publishes currency and bond prices.

The PBOC took severe measures to curb capital outflows and depreciation pressure on the yuan starting in 2016. Measures included tightening controls on outbound investment, increasing scrutiny of trade and investment deals, changing the formula for calculating the yuan’s daily central parity against the dollar, and raising the cost of borrowing the yuan in offshore markets. As the yuan started to appreciate again in 2017, the authorities relaxed some of the controls, but have recently tighten up again as the strengthening dollar and rising U.S. interest rates started to put pressure on the Chinese currency.

The ban communicated to banks on Thursday is the latest in a series of small measures taken by the PBOC to prevent a steeper decline in the yuan, even as it allows the currency room to respond to market pressure. Last week, the central bank reimposed a requirement that financial institutions hold a deposit at the central bank when they purchase foreign exchange forward contracts for their clients.