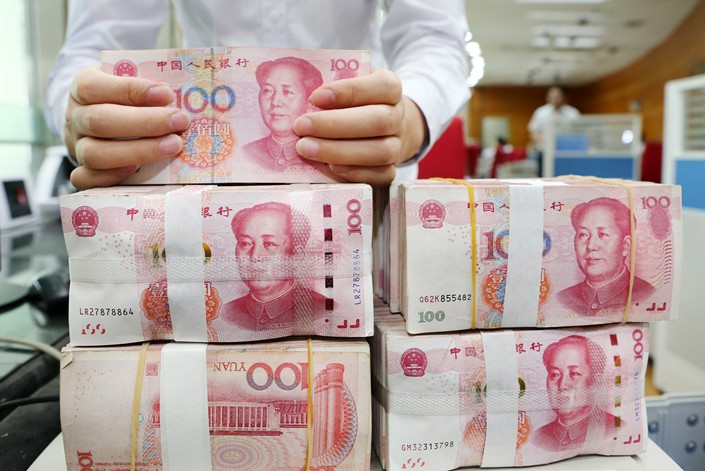 (Beijing) — Three of China’s top lenders reported that their first-half profits grew at least 5% year-on-year as their privileged access to cheap funding gave them an advantage over smaller competitors squeezed by a national deleveraging campaign.

The banks’ accelerating profit growth shows that the country’s big state-owned banks have managed to weather the sweeping new asset management rules that have taken a toll on the rest of the industry.

China Construction Bank (CCB), the country’s second-largest bank by assets, reported its profit grew 6.3% to 147 billion yuan ($21.6 billion) in the six months through June, according to a CCB’s statement filed to Hong Kong Stock Exchange on Tuesday. The first-half figure implies a 7.1% quarterly profit growth for CCB, up from 5.4% quarterly profit growth in the first three months of the year.

Industrial and Commercial Bank of China, the country’s largest bank by assets, will report its earnings on Thursday.

The big banks’ bottom lines have continued to benefit in the first half from a steady or rising net interest margin (NIM), a key profitability metric that measures the difference between a bank’s income from lending and its funding costs. The big banks’ respective NIMs have continued to rise since the second half of 2017, a time when the national deleveraging campaign had squeezed the off-balance-sheet funding channels of less-capitalized banks. Big banks, however, have had the advantage of their large deposit bases, which grant them an enormous source of cheap funding thanks to the country’s low deposit rates. This funding source, along with their access to cheap central bank financing, has helped bolster their NIMs.

The trio also reported improved nonperforming-loan ratios, despite the growing risk of bad debts across the sector amid slowing economic growth.

Industrywide, the average nonperforming loan ratio was 1.86% at the end of the first half, according to the China Banking and Insurance Regulatory Commission (CBIRC).

Because China’s leadership has indicated it will maintain a pro-growth stance, market participants believe the deleveraging campaign will continue, but with some easing for specific sectors of the economy, analysts said. In the second half of 2018, on-balance-sheet credit growth will pick up at big banks, while smaller lenders could get a breather from the harsh capital requirements previously imposed under the campaign.

China Citic Bank, the banking arm of the state-backed conglomerate Citic Group, reported that its nonperforming-loan ratio had risen to 1.8% at the end of the first half because of the high leverage of some of its corporate clients and the greater number of bad loans it has been required to recognize under more stringent regulatory standards.