Banks Feel the Heat as Regulatory Cleanup Piles On Pressure 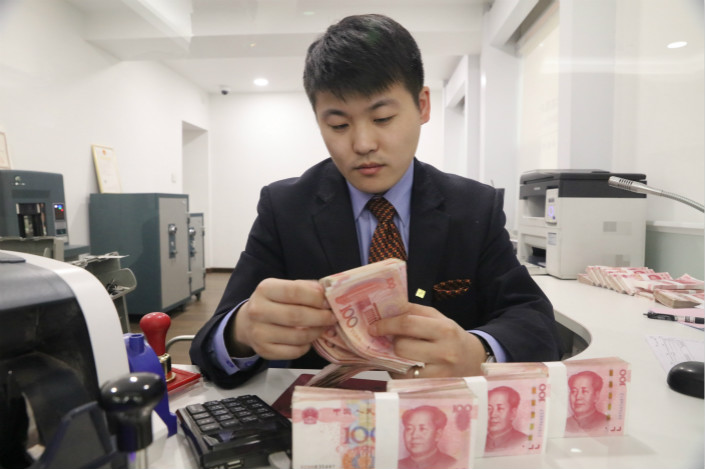 (Beijing) — China’s banks are in the eye of the storm again this year as policymakers have made it clear there will be no letup in the campaign to prevent financial risks and rein in leverage in the financial sector.

Lenders are under the gun to comply with rules aimed at bringing risky off-balance-sheet loans back onto their balance sheets, and face a squeeze on funding as deposit growth slows and regulators curb their use of interbank borrowing. They also face further regulatory tightening as they implement new guidelines for the asset management industry.

But policymakers are cutting banks some slack even as they make life more difficult. In January, financial regulators told banks they would be given more options to raise funds to bolster their balance sheets, including the ability to issue perpetual bonds and convertible bonds, although the directive was not published until March. The banking watchdog also announced in March that lenders could benefit from a lower loan-loss reserve requirement and a lower minimum ratio of provisions to total loans, provided they met certain conditions.

In April, the People’s Bank of China reduced banks’ reserve requirement ratio by 1 percentage point in order to allow them to pay back high interest-rate Medium-Term Lending Facility (MLF) loans from the central bank. The cut which effectively lowered banks' funding cost should help to expand their net interest margin (NIM), a key profitability ratio that measures the difference between the interest rates they pay to get deposits and other funds, and what they charge borrowers. It also gave smaller banks more liquidity to increase lending.

Regulators also gave banks and other financial institutions 18 months longer to comply with new asset management rules than originally planned. The long-awaited regulatory framework, announced on April 27, covers all types of asset management products that financial institutions offer and is aimed at tightening supervision of the industry, controlling risks and reducing regulatory arbitrage. But for banks, among other consequences, it will potentially mean lower returns as they are forced to increase provisions on their asset management products and bring them back onto their balance sheets.

“The message (from the government) is: We want to have deleveraging but we don’t want to see any kind of over-tightening,” said Sophie Jiang, head of Hong Kong and China banks equity research at Nomura Holdings Inc. “We have seen tightened rules on the banking sector and the asset management guidelines, which are especially targeting the dodgy shadow-banking business. At the same time, interbank rates have been touching relatively high levels and the liquidity situation has been relatively tight. So we see the reserve requirement ratio cut and the MFL repayment as actually very conservative ways to ensure that deleveraging can play out smoothly.”

The campaign to curb financial risks and rein in leverage is forcing banks to bring back onto their books liabilities held off their balance sheets to avoid regulation, notably wealth management products, investments that offer guaranteed returns that are far higher than ordinary bank savings rates and are often risky because they are made in sectors where the government has restricted bank credit.

The rapid growth in banking assets over the last five years has left some lenders with low levels of capital buffers to protect them from major losses in the value of their assets and to meet regulators' requirements on capital adequacy. Hangzhou-based Zheshang Bank, for example, saw its assets balloon by 130% to 1.54 trillion yuan in the four years through 2017, making it one of China’s fastest-growing commercial banks.

Banks' capital adequacy is also coming under pressure from the need to comply with International Financial Reporting Standard, a new international accounting rule that covers how banks should classify financial assets and account for an impairment in their value. It will force banks to set aside provisions based on expected losses from bad debts rather than incurred losses. Banks listed in Hong Kong will have to comply from the first quarter of 2018 while those listed in the Chinese mainland will have to adopt the new standard from 2019.

Compliance is already having an impact on the profitability of some banks. Banking analysts at UBS AG said that China Construction Bank's first-quarter profit was hit by a 2.5 billion yuan ($393.1 million) impairment charge as a result of the implementation of the new standard, amounting to a 2.5% “drag” on profit.

Some banks are turning to the stock and bond markets to raise money to bolster their balance sheets. Last year 25 mainland-listed banks announced plans to raise a total of 600 billion yuan through a variety of instruments including private placements, convertible bonds and preferred shares. Another 12 banks listed in Hong Kong also announced fundraising plans, including Chongqing Rural Commercial Bank and Jilin Jiutai Rural Commercial Bank.

So far this year, at least five banks have published plans to boost their capital, including Agricultural Bank of China which is raising as much as 100 billion yuan through a private placement. The bank's Common Equity Tier 1 capital ratio, a measure of financial strength, was 10.63% at the end of 2017, the lowest among the five biggest state-owned commercial banks, according to data from Moody's Investors Service.

Hong Kong-listed Harbin Bank is seeking as much as 15 billion yuan through the issue of perpetual bonds to supplement its core capital and a further 10 billion yuan to fund its lending business and repay maturing bonds.

The deleveraging campaign has also involved curbing lenders' ability to raise capital from the interbank market through the issuance of short-term Negotiable Certificates of Deposit (NCD). Some smaller banks were obtaining as much as 40% of their funding from NCDs, raising concerns that their reliance on the instruments to fund longer-term investment could lead to a liquidity crunch. The crackdown led to a decline in outstanding NCD to 8 trillion yuan at the end of the year from a peak of 8.45 trillion yuan in August, according to data from Shanghai Clearing House.

Issuance declined in the first quarter of 2018 as the interest rates banks had to pay on the NCDs rose because of the shortage of funding available from the interbank market as the central bank tightened liquidity. In the first quarter, banks issued 5.37 trillion yuan of NCDs, down from 5.52 trillion yuan in the fourth quarter of 2017, according to data compiled by Bloomberg.

Efforts to lower banks' reliance on NCD and the interbank market has left many lenders short of funding. That has contributed to a scramble for deposits that is now putting upward pressure on savings rates and threatening to squeeze net interest margins further.

“Liquidity has tightened for all banks, but because the big banks are less reliant on interbank funding, they benefit from the higher interbank rates,” said Grace Wu, head of China banks ratings at Fitch Ratings. “For the midsize banks, which are more reliant on this non-deposit funding, the higher rates will impact their funding profile more severely.”

She pointed out that most of the medium-sized banks saw their NIM contract by 20 to 30 basis points on average in 2017, while those of the large state banks improved. A Caixin analysis of 29 Chinese banks listed in Hong Kong and Chinese mainland showed that with the exception of the Big Four state-owned commercial banks and the Postal Savings Bank, Zhangjiagang Bank, and Wuxi Bank, the NIMs of the remaining 22 lenders all fell in 2017 from 2016. The biggest declines were at Bank of Shanghai, which fell by 48 basis points to 1.25%, and Huaxia Bank, which shrank by 41 basis points to 2.01%.

The crackdown on off-balance sheet wealth management products along with curbs on NCD issuance in the interbank market has left banks increasingly dependent on deposits to fund their lending activities. But they have to compete not only with other bricks and mortar banks, but also with online lenders and money-market funds such as Yu'e Bao who are offering higher interest rates to lure customers.

Banks are becoming less attractive to Chinese savers. Data from the central bank show that outstanding yuan deposits at Chinese banks increased by 8.7% year on year in March, down from 10.3% growth a year earlier and close to the slowest pace since the central bank started releasing monthly data in 1991.

First-quarter earnings reports show that most of the major listed banks, including the biggest lenders, are struggling to increase deposits sufficiently to maintain the current pace of lending growth. China Construction Bank (CCB), the country's second-biggest bank by assets, saw its deposits rise by just 4% year-on-year and 3% quarter-on-quarter, Nomura analysts wrote in an April 28 report. China Merchants Bank saw no growth in deposits on a quarter-on-quarter basis and only a 3% increase year-on-year.

“Expanding our branch network, raising interest rates and drinking with clients to get deposits has become more and more useless,” Xu Yiming, chief financial officer of CCB, said on the company's earnings conference call. The decline in the household savings rate means that growth in deposits will be weak in future and the pressure on small and medium-sized banks to grab deposits will increase. At a recent internal meeting of CCB, the bank told staff to use all means possible to win new clients, and urged them to use financial technology to better serve clients and lower the cost of bringing in new business.