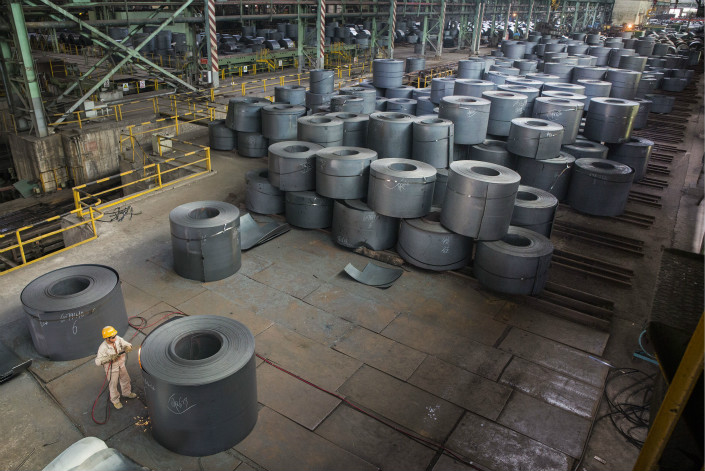 A worker on the job at a state-owned Wuhan Iron and Steel Group plant in August 2016. The company later merged with Shanghai-based Baosteel, and the new firm pioneered mixed-ownership reform. Positive progress has been made over the last year in lowering state-owned enterprise leverage by using measures including mergers and restructurings, Premier Li Keqiang said. Photo: VCG

China will advance the campaign through better corporate management, more mixed-ownership reform, debt-to-equity swaps, better corporate debt restructuring and bankruptcy policies where government, enterprises and banks shoulder loss risks together, Premier Li Keqiang said Wednesday in a meeting of the State Council, China’s cabinet, according to a document (link in Chinese) on the central government website.

Positive progress has been made over the last year in lowering state-owned enterprise leverage by using measures including mergers and restructurings and market-orientated debt-to-equity swaps, Li said at the meeting.

At the end of last year’s second quarter, the leverage ratio of China’s overall corporate sector stood at 163.4%, continuing a downward trend for the fourth consecutive quarter, data from Bank for International Settlements showed. The debt-to-asset ratio at Chinese state-owned industrial firms dropped to 60.4% in 2017 from 61.4% in 2016, official data showed.

As of December, debt-to-equity swap deals worth 1.5 trillion yuan ($237 billion) had been reached between 102 enterprises and various organizations such as asset management companies specializing in this sector, according to an article from central government’s official website.

More than 6,000 bankruptcy cases were closed last year. Equity financing, the process of raising capital through the sales of shares rather than issuing bonds, continued to expand, the article said.

Cutting excessive borrowing by state-owned enterprises will help to put leverage throughout the economy under control, Chen Hongwan, director of the Department of Fiscal and Financial Affairs of the National Development and Reform Commission, China’s state planner, was quoted as saying by the official Xinhua News Agency.

An ongoing focus by Chinese regulators to address systematic risks is positive for banks and companies, and corporate leverage will improve from slower debt growth, Moody’s Investors Service said in a research note. “We expect that high leverage borrowers will come under closer scrutiny when receiving bank credits,” it added.