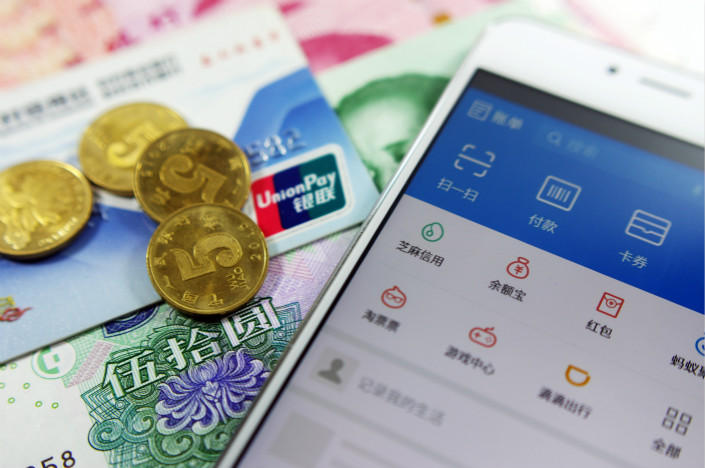 Yu’e Bao’s assets grew about 1.3% in the last three months of 2017, a stark slowdown from the first three quarters of the year, when the fund grew by 8.9%, a Moody's report said. Photo: VCG

Yu’e Bao, the world’s largest money market fund, kept less of its assets as bank deposits at the end of 2017 to meet government liquidity requirements for the enormous fund market.

Yu’e Bao, the 1.5 trillion yuan ($236.5 billion) investment product of the Alibaba-affiliated Ant Financial, has grown to be a cornerstone of the country’s money market fund industry, with enough assets to put it on par with a midsize commercial lender.

The fund controlled 22% of the assets in the country’s money market funds at the end of 2017, down from 27% at the end of March 2017, according to a report by Moody’s Investors Service. Over the same period, the proportion of Yu’e Bao’s assets invested as bank deposits and reserves fell to 57% in the fourth quarter from 87.1% in the third quarter.

Yu’e Bao’s assets grew about 1.3% in the last three months of 2017, a stark slowdown from the first three quarters of the year, when the fund grew by 8.9%, the report said.

The sharp slowdown in growth has been rarely seen in money market funds, industry insiders said. The change took place after Oct. 1, when the country’s top securities regulator and the central bank required money market fund managers to limit deposits in a single commercial bank’s to 10% of net assets.

Instead, Yu’e Bao has increasingly been buying highly liquid assets such as bonds and bank notes, Caixin has learned.

Large money market funds such as Yu’e Bao have come under scrutiny by the China Securities Regulatory Commission (CSRC), and have received window guidance about their capital expansion. The CSRC and the central bank are together working on specific rules for “money market funds with systemic importance” to control the liquidity risks, Caixin has learned.

Tianhong Asset Management, which manages Yu’e Bao’s funds, set new daily limits for fund subscriptions three times in 2017, which is how it managed to lower the fund’s growth rate.

At present, Yu’e Bao’s asset balance is fully compliant with the guidelines regarding bank deposits, Caixin has learned.