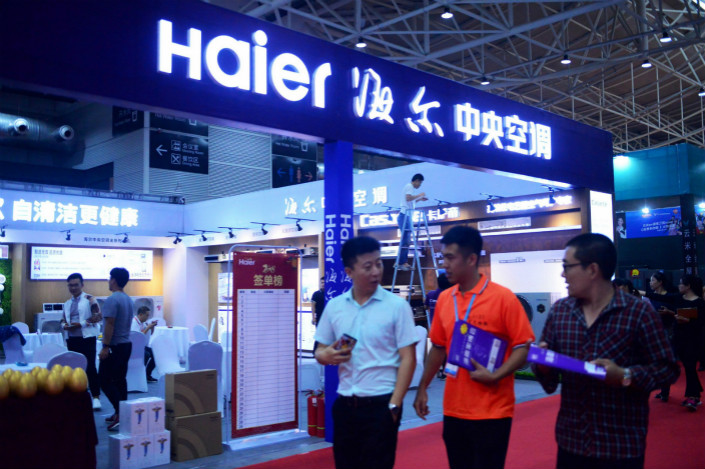 Haier displays its air conditioners at a recent trade fair in its hometown of Qingdao. Photo: VCG

A wholly-owned European unit of Haier will pay 475 million euros ($550 million) in cash to buy 100% of Candy S.p.A. from the company’s founder and owner Fumagalli family, the Chinese firm said in a filing with the Shanghai Stock Exchange on Saturday.

The deal requires approval by regulators in China, the European Union, Russia, Turkey and Ukraine, it said.

“Qingdao Haier and Candy are highly complementary in brand and product portfolios, as well as supply chains. The combination is expected to further enhance both sides’ competitiveness in the European and global markets,” Candy said in a statement dated Friday. “The innovation and synergies between the two companies in smart home appliances will also bring a totally new customer experience.”

After the deal closes Haier's European headquarters will be in Brugherio, Italy, where Candy is based, Candy said.

Created in 1945, Candy manufactures washing machines, refrigerators and kitchen appliances. It has six production plants in Italy, Turkey, Russia and China. The group earned 1.15 billion euros in revenues last year, up 14% from a year ago.

Sales of washing machines contributed to about half of its income. Nearly 70% of its turnover was achieved within the EU, with the United Kingdom, France and Italy as its top three markets, according to the company’s figures.

The acquisition marks the latest overseas expansion by Qingdao Haier, as it consolidates its place as the world’s leading home appliance maker.

The company bought the appliance unit of U.S. rival General Electric in 2016 for $5.58 billion in part of its drive to focus on development of “smart” home equipment that can automatically direct a variety of household gadgets.