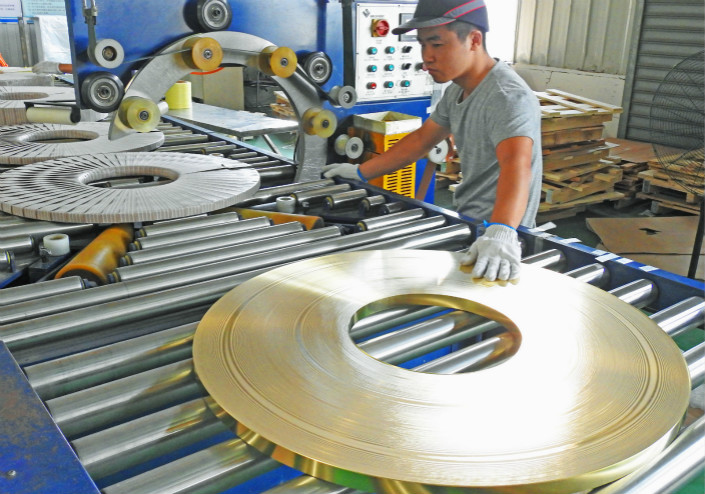 A worker on the production line of a new materials factory in the city of Yungang, Jiangsu province. Photo: VCG

The contribution of high-value-added industries like information technology (IT) and financial services to China’s overall economy hit a six-month high in September, according to a private index released on Tuesday.

The Mastercard Caixin BBD New Economy Index (NEI) rose to 31.3 in September from 29.1 in the previous month, as capital inputs increased. This reading indicates that “new economy” industries accounted for 31.3% of overall economic input activities in September. The index measures labor, capital and technology inputs in 10 emerging industries relative to those used by all industries.

Launched in March 2016, the NEI defines a new economy industry as one that is labor and technology intensive but has relatively low ratios of fixed capital, has sustainable and rapid growth, and is in a strategic industrial sector encouraged by the government.

The new IT sector remained the top contributor among the 10 major industrial categories, making up 10.7 percentage points of the NEI reading for September. Financial and legal services came in second, while the advanced materials sector, which was second in August, dropped to third.

The rise in September was mainly due to the subindex of capital investment inputs, which rose 7.2 points from the previous month to 39.1. Capital inputs have a weighting of 35% in the NEI. The subindex of technology inputs, which has a weighting of 25%, dropped to 26.7 in September, from 28.1 in August. The technology gauge measures the number of scientific research personnel recruited by the tracked industries, and the number of inventions and patents they obtained. The subindex of labor inputs increased slightly to 27.4 in September, from 27.3 in August.

The average monthly entry-level salary in new-economy sectors, based on data compiled from online career and recruitment websites, was 10,161 yuan ($1,479), 159 yuan less than the previous month and the lowest since November 2017. The premium over the average entry-level salary for the economy rose to 3.8%, rebounding from August’s 3.1%, which was the lowest since the NEI was launched.

The monthly NEI reports are compiled by Caixin Insight Group, a financial data and analysis platform of Caixin Media, and Chinese big-data research firm BBD, in collaboration with the National School of Development at Peking University.