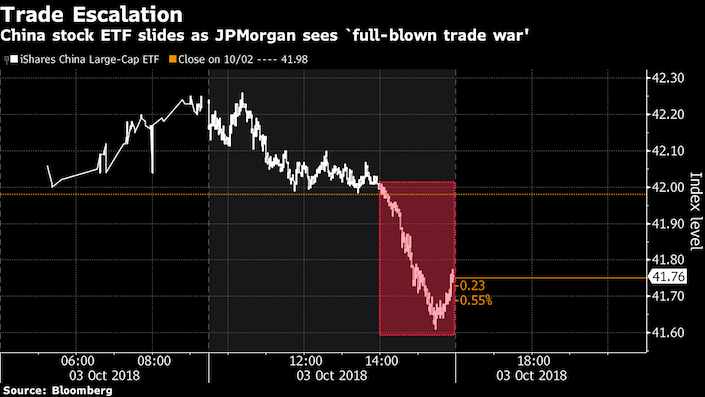 (Bloomberg) — The likelihood of a “full-blown trade war" next year between the world’s two largest economies made JPMorgan Chase & Co. the latest brokerage to drop its bullish call on Chinese stocks.

The trade conflict will only escalate as the U.S. maxes out tariffs on Chinese imports, the dollar strengthens and the yuan weakens further, JPMorgan strategists including Pedro Martins Junior, Rajiv Batra and Sanaya Tavaria wrote in a report, lowering their recommendation on China to neutral from overweight. With mainland markets shut all week for a holiday, the $4.9 billion iShares China Large-Cap ETF dropped to a two-week low in New York.

JPMorgan’s cautious turn on Chinese equities follows similar moves by Morgan Stanley, Nomura Holdings Inc. and Jefferies Group earlier this year. While JPMorgan slashed its target and earnings estimates for the MSCI China Index -- already down 24% from its peak in January -- the strategists still expect the gauge to rebound to 85 points by the end of the year, or 8.9% from Wednesday’s close.

"A full-blown trade war becomes our new base case scenario for 2019," the strategists wrote in a note dated Wednesday. "There is no clear sign of mitigating confrontation between China and the U.S. in the near term."

Tensions between Washington and Beijing flared up again last week when the Trump administration slapped a 10% tariff on about $200 billion of Chinese goods. Xi’s government responded in kind with duties on $60 billion in U.S. products, scuppering hopes for any quick solution to the dispute.

Still, that may not impede a relief rally in emerging markets, according to JPMorgan. The New York-based bank said double-digit earnings growth, an under-allocation to the asset class and a valuation discount to developed-market equities could spur near-term gains.

JPMorgan revised its forecast for economic growth in China next year to 6.1% from 6.2%. Without accounting for countermeasures, the trade war represents a 1 percentage point dent to growth, the strategists said.

"Higher tariffs are squeezing Chinese manufacturing’s profit margin, reducing the investment incentive and hiring, which would then drag on consumption via reduced income," they wrote.