In Depth: Tencent Refocuses on Business Customers in Major Overhaul 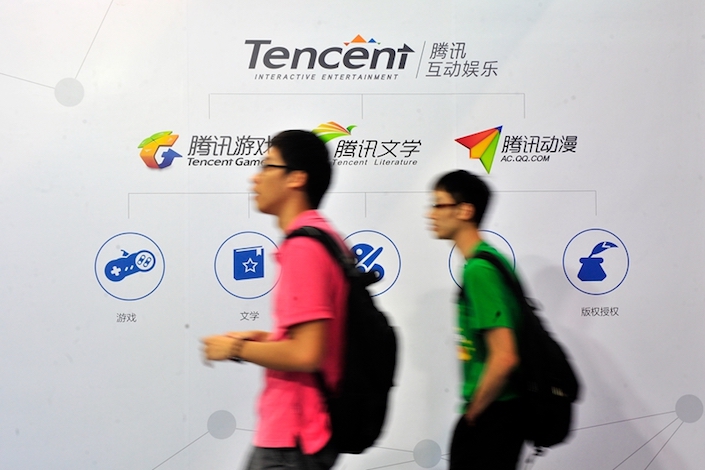 With its first across-the-board overhaul in six years, Chinese internet giant Tencent Holdings is reorganizing to focus more on business customers in response to headwinds from slower growth, rising competition and investment risks.

The restructuring, which will affect the company’s 50,000 employees and more than 30 vice president-level executives, comes as Tencent faces growing challenges to maintaining its momentum after years of uninterrupted growth. The 19-year-old company posted its first quarterly profit drop in 13 years in the second quarter as its core gaming business grappled with increasing government scrutiny.

A saturating market for Tencent’s turbocharged social networking business and a slow pace of moving into the emerging cloud computing sector have also fueled investors’ concerns. Tencent’s stock has fallen more than 30% from a peak in late January, wiping out HK$1.5 trillion ($191.5 billion) of the company’s market value.

Tencent has been talking about an overhaul since late last year when Chairman and CEO Pony Ma said the company should focus more on business clients. A senior executive told Caixin that Tencent finalized the restructuring plan in late September as the company seeks a major strategy shift to business solutions from consumer-focused internet products.

Under the plan, Tencent will trim its seven business groups to six by merging the social networking, mobile internet and online media divisions into one and creating a new group focusing on cloud and smart industries. Gaming will remain under the interactive entertainment group and WeChat, the popular messaging app, will remain a separate group.

With the reshuffling, Tencent will “further explore the integration of social, content and technology that is more suitable for future trends, and promote the upgrade from consumer internet to industrial internet,” the company said in a statement.

“These changes now will be the starting point for the next 20 years of Tencent’s operations,” Ma said. He called the overhaul a “major strategic upgrade.”

Tencent’s current corporate structure was created in 2012 as the company sought to win customers amid the mobile internet boom. Unlike Alibaba, where power is highly consolidated under founder Jack Ma, Tencent has a decentralized structure that gives each product-focused division a high degree of independence, industry analysts said.

Zhang Zhidong, a co-founder of Tencent, said recently that the 2012 restructuring allowed Tencent to roll out new products quickly but also led to insufficient sharing of technology and data among units. Zhang said this was blocking Tencent’s progress in the era of artificial intelligence, big data and cloud computing.

Tencent has moved more slowly than rivals as China’s tech giants push into cloud computing and AI. Tencent set up its cloud computing unit in 2014, about two years later than Alibaba. In 2017, Alibaba dominated China’s cloud computing market with 45% compared with Tencent’s 10%, according to market data provider IDC.

The latest restructuring plan reflects Tencent’s efforts to improve cloud-based data services for corporate clients to take on Alibaba. The newly created Cloud and Smart Industry Group will merge Tencent’s offerings in cloud computing, online education, health care, transport and mapping, among others, into a unified whole to better harness the huge amount of data and analytics the company receives.

Tencent said it will also set up a technical committee to promote internal coordination in research and development of key technologies that could serve the company’s push into innovative sectors.

The restructuring also reflects Tencent’s concerns over the prospects of its core online gaming business, which has been hit by rising regulatory hurdles.

The move is seen by analysts as an effort to separate risks related to the gaming business from Tencent’s other businesses.

Gaming operations have long been Tencent’s most profitable business line, although the contribution to total revenue declined from more than 55% in 2011 to 34% in the second quarter this year.

However, the industry faces rising pressure from regulators concerned about gaming addiction among children, targeting Tencent’s hottest title, “Honor of Kings,” the Chinese version of “Arena of Valor.” Authorities have tightened scrutiny of online games and announced a cap on the number of new game releases, putting a pause on Tencent’s plan to charge players for another popular game “Player Unknown's Battlegrounds.”

Amid the regulatory crackdown, Tencent’s gaming business revenue growth slowed to three-year low of 6% in the second quarter.

The consolidation of content-related businesses also reflects Tencent’s effort to bolster its content offerings to compete with emerging rivals such as news aggregator Toutiao.

With popular messaging apps QQ and WeChat, Tencent has long controlled the most extensive access to users. But rivals are catching up.

According to market researcher QuestMobile, internet users spent less time on Tencent’s social networking platforms in the first half this year while their usage of Toutiao and its affiliated short-video sharing apps rose.

Tencent has seen Toutiao as a key potential competitor since 2015, a former Tencent employee said. The news aggregator, which was set up in 2012, has grown quickly by keeping people hooked with its news feed services driven by algorithms. As of April, Toutiao had more than 90 million daily active users, according to QuestMobile. TikTok, Toutiao’s short video unit, had 150 million daily active users by June.

Tencent has developed several products targeting Toutiao and TikTok in hopes of leveraging its broad access to users through QQ and WeChat. But none of the products have become strong enough to challenge the rivals.

A person close to Tencent said the consolidation of the social networking and content-related businesses will expand Tencent’s capability for offering content customized to users.

Tencent’s two existing groups WeChat and Corporate Development remain unchanged in the latest restructuring, partly due to their strong performance.

Tencent has become one of the most active dealmakers in China’s internet market since 2014. It is now the backer behind around 28% of the country’s unicorns — tech startups that gain valuations of more than $1 billion — including car-hailing giant Didi Chuxing and on-demand service provider Meituan Dianping, according to intelligence platform CB Insights.

This year, Tencent stepped up its investments in retail market, spending more than 20 billion yuan on offline store operators such as Yonghui Superstores and Carrefour.

Tencent’s investment spree quickly expanded its business ecosystem but also sparked criticism that the company relied too much on acquisitions rather than tech innovation. Some in the market called Tencent “an investment bank” in the tech sector.

Li Zhaohui, a managing partner of Tencent Investment, said Tencent’s investment strategy is to use market resources in the most efficient way to secure leading positions in different sectors.

A wide range of investment has boosted Tencent’s financials. Since 2017, investment returns have become one of Tencent’s major revenue sources. In the first quarter this year, Tencent reported 61% growth of net profit from last year. But if investment returns are excluded, the company’s profit growth would have dropped to 29%, company financial reports showed.

However, as more and more Tencent-backed startups have started to seek public listing, Tencent has found itself increasingly exposed to risks of stock market volatility. In the second quarter, Tencent’s net profit declined 23% from the previous quarter, mainly reflecting shrinking asset valuations due to stock market turmoil.