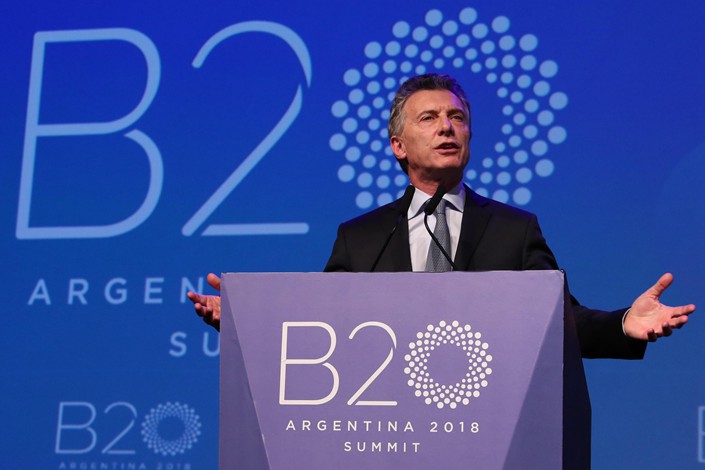 Argentine President Mauricio Macri as delivers a closing speech at the annual meeting of the B-20, the G-20 business forum, in Buenos Aires, Argentina, on Friday. Photo: IC

A Chinese government-backed business group has expressed its opposition to a policy recommendation report drafted for leaders from 20 powerful countries — including the U.S. — which mentioned “eliminating state-related competitive distortions.”

The move marked the first time that a Chinese business group has rejected a draft policy proposal report produced by the Business 20 (B-20), a platform that represents the voices of enterprises from the countries that form the Group of 20 (G-20).

The China Council for the Promotion of International Trade (CCPIT), the country’s foreign trade and investment promotion agency, strongly opposes the policy recommendation paper drafted by the B-20 Argentina Secretariat, it said in a statement on Friday.

The statement targets the draft policy proposal report that the B-20 released after a two-day summit in the Argentine capital of Buenos Aires. Since its founding in 2010, the B-20 has held a summit each year and produced a report of policy recommendations for the G-20 leaders in areas that include trade, investment, employment and education.

The CCPIT said that Chinese business communities have clearly stated their opposition to unilateralism and protectionism and advocated the principle of “ownership neutrality to enterprises of different ownership,” and submitted their revision to the text of the draft policy paper to the B-20 Argentina Secretariat.

However, the Chinese business group alleged that some recommendations in the draft policy paper turn a blind eye to the Chinese side’s concerns, and put forward a biased view of state-owned enterprises’ (SOEs) behaviors in terms of market competition, production overcapacity, and integrity and compliance.

The group said it holds strongly that this policy paper “shall never be disseminated or published in the name of (the) B-20, neither should it be submitted to the G-20 leaders in any form.”

Furthermore, the group repeated its appeal to the B-20 Argentina Secretariat that the “opinions of the Chinese business community should be respected and adopted, and material revision should be made in (the) B-20 policy paper,” so as to “avoid a devastating effect on the B-20 process and cooperation.”

China’s state-owned sector has long been criticized over low efficiency, lack of transparency and corruption allegations.

“As long as state-owned enterprises continue to be a permanent feature in the economic landscape, it is fundamental to develop transparent new international rules that ensure no party is granted access to any non-commercially available benefit based exclusively on its ownership,” the B-20’s draft policy paper said.

The draft paper recommended that the G-20 leaders should engage in “plurilateral negotiations” toward an agreement on competitive distortions “that would imply significant limitation and/or elimination of policies that accord preferential treatment to SOEs.”

The B-20 put forward this proposal based on the developments at the Global Forum for Steel Excess Capacity, a G-20 initiative, and the Charlevoix G-7 Communiqué, both of which emphasized the need for negotiations to address market-distorting industrial subsidies and trade distortion actions by SOEs, according to the draft report.

The paper also called on G-20 members to ensure that SOEs adhere to and disclose high-quality standards of integrity and compliance in line with international good practice, and assume accountability to stakeholders, including reporting publicly on anti-corruption programs.

The draft report was based on a seven-month period of discussion, and is now ready to be submitted to the G-20 leaders, the B-20 Argentina Secretariat said on its website. The upcoming G-20 Leaders’ Summit is scheduled to take place in Buenos Aires from Nov. 30 to Dec. 1.